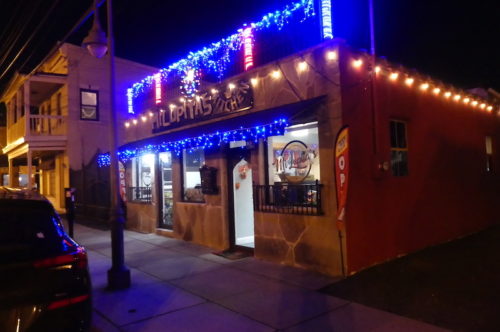 Read all about them, as well as a new smoke shop, in this edition of redbankgreen‘s Retail Churn. 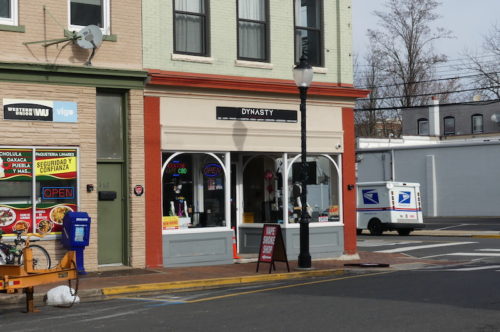 Dynasty Smokes has opened at Monmouth and West Streets. Below, Christian Marroquin-Garcia with a sign for his newly minted restaurant.  (Photos by John T. Ward. Click to enlarge.)

• After a decade as a delivery guy for other Mexican restaurants in town, 32-year-old borough resident Christian Marroquin-Garcia has opened his own: Mi Lupita’s Kitchen, on Bridge Avenue facing the train station.

The menu touts “authentic Mexican street food,” including standard categories: tacos, enchiladas, burritos and more. But its foundation is something Garcia brought with him from his native Guatemala 12 years ago: corn tortillas made by a process known as “nixtamalization.”

It involves hours of boiling corn kernels in water and food-grade lime, soaking and drying, and then milling them by volcanic-ash stone into a dough, all of which Garcia and his crew do on-site. The effort yields tortillas that are both more nutritious and more flavorful than you might get elsewhere, he told redbankgreen.

“I used to hate the tortillas you get here,” he said. “They were just so nasty. But we had to adapt.”

The space was the home of Mary and Roy Jennings’ Chowda House for six years until it closed in late 2019. The couple still own the building.

The business is owned and operated by a father-and-son, Paul and Alexander Papis, who have Greek cooking in their DNA. Alexander tells Churn his late grandfather, George Papis, was well-known in the 1970s as the owner of GoGo’s Souvlaki King on Staten Island.

“We are using all of the same family recipes,” including George’s special tzatziki sauce, Alexander said.

The space was last occupied by Rice Box.

• Dynasty Smokes has opened at 160 Monmouth Street, at the intersection of West Street.

First-time business owner Tony Zhou, an East Brunswick resident, tells Churn he wants to use Dynasty to “educate” the public on the various ways to partake of CBD and now-legal cannabis as those markets grow.

The space was most recently leased to a real estate brokerage.