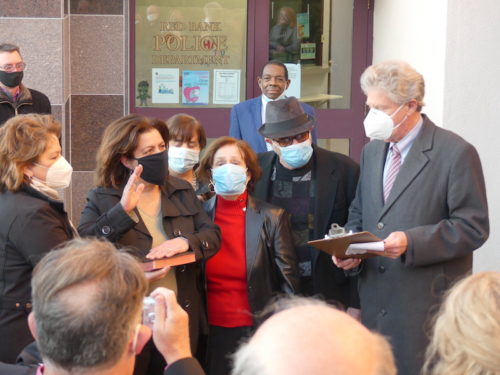 Angela Mirandi, in black mask, as she was sworn to office by Congressman Frank Pallone outside borough hall February 11. (Photo by John T. Ward. Click to enlarge.)

A Monmouth County court denied a request Monday that Angela Mirandi be temporarily removed from her seat as an appointed member of the Red Bank council.

Superior Court Judge David F. Bauman instead ruled that Mirandi can continue in the post at least until April 8.

Mirandi, a political newcomer, was appointed by the borough council on February 9 to succeed Erik Yngstrom, who had abruptly resigned three weeks earlier.

The appointment, through the end of 2022, followed a 3-to-1 vote, with one abstention.

Councilwoman Kathy Horgan, who cast the “no” vote, and Charter Study Commission member Kate Okeson filed suit February 22 to have Mirandi removed from office, contending her appointment was invalid.

Horgan alleged that she’d been left out of the party nomination process by Democratic Municipal Committee Chairman Ed Zipprich, a council colleague. Okeson claimed in the lawsuit that she also was excluded, even though she’s the local party secretary.

The suit names the Democratic organization, Zipprich, the borough and Mirandi as defendants.

Attorney Thaddeus Maciag, representing Horgan and Okeson, argued in letters to the court that Mirandi should be removed immediately, if only on a temporary basis, to avoid “irreparable harm.”

But at a court session conducted via Zoom Monday, Bauman rejected that claim as a rationale for Mirandi’s temporary removal.

“Who is to be ‘irreparably harmed’?” by allowing Mirandi to continue on the council for several more weeks, he asked. “Is it the plaintiffs? Is it Ms. Mirandi? Is it the borough council? Or is it the constituents of the borough of Red Bank, or the public in general?”

That “is not clear from the written submissions and oral arguments thus far,” he said.

He noted that two of the attorneys – Dan O’Hern, representing the borough, and Scott Salmon, for Mirandi – were appointed late Friday, and had not yet had an opportunity to file arguments.

O’Hern told Bauman that he was “a little concerned about the whipsaw” effect of having Mirandi temporarily removed and possibly reinstated at a later date. He suggested the court “maintain the status quo” until the April 8 hearing.

“But the borough’s position is we will abide by whatever order your honor enters in this matter,” he said.

Salmon said the key issue was the “presumption of validity” of the council’s action in appointing Mirandi. But also at stake, he said, were Mirandi’s rights.

“Councilwoman Mirandi is not without rights here,” he said. “We would submit she is the only person here who would suffer irreparable harm” if she is removed, even if only to miss the council’s next session, scheduled for Wednesday.

“Each and every vote she misses cannot be fixed or remedied,” especially if there’s a matter on which her vote might change the outcome, Salmon said.

Bauman set a schedule of court filings and answers, with a hearing on the removal request to be held Friday, April 8.

O’Hern and Salmon are both to paid up to $17,500 for their work, according to resolutions passed 3-0 by the council members who were able to vote at the hastily arranged special council session.

Unmentioned at that meeting: that the Monmouth County Joint Insurance Fund has denied Red Bank’s request for coverage of legal fees in the case. Borough Attorney Greg Cannon reported the rejection in a March 16 letter to the court that did not appear on the court docket system until Monday morning.

Cannon told redbankgreen via email that “because the complaint does not seek monetary damages, it does not fall within the coverages provided to the Borough by the JIF.”

The borough “will not be appealing the determination, and I am not aware of any other source of funds” for the legal fees, he said.