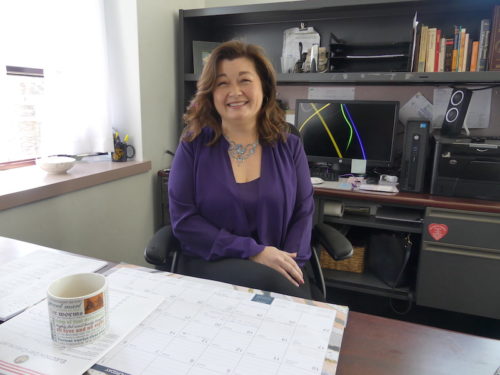 Having begun her career in a town so small that she sometimes had to fill in as a bus driver, Red Bank’s new borough clerk, Laura Reinertsen knows what it means to wear multiple hats.

It’s an experience that informs her approach to her job, she told redbankgreen last week.

“I kind of veer out of my lane just to keep things moving,” she said.

Reinertsen was sworn to the position April 1, succeeding Pam Borghi, who retired in February after 28 years as a borough employee, the last 12 as clerk.

Reinertsen comes to Red Bank from the dual posts of administrator and borough clerk in Kenilworth, in Union County. But the affable 51-year-old started her career in the town where she’s lived most of her life, and where one of her two adult children works as a police officer: Winfield, a “blink and you miss it” municipality with a population of 1,400, or the combined enrollment at Red Bank’s primary and middle schools.

Nestled on the northbound side of the Garden State Parkway at exit 136, Winfield was created in 1941 by the federal government to house Kearney shipyard workers during World War II. To this day, all its 697 homes are owned by a community organization and residents are tenants, paying some of the lowest rents in New Jersey. In 2019, NJ.com reported a 25-year waiting list for availabilities.

A graduate of Rahway High School, Reinertsen went to work at Winfield’s town hall 22 years ago, after a phone call from now-deceased Mayor David Wright, a friend of the family.

The clerk, one of the town’s two office workers, was retiring, Wright told her. The job required not only answering phones, but “typing some letters” and handling just about anything else that needed doing.

Wright, whom Reinertsen considers a mentor, told her, “if you see something that needs to be taken care of, you take care of it.”

That turned out to include filling in as police dispatcher, keeping records for the municipal court, filing stormwater reports and – when the volunteer who drove the town’s senior city bus wasn’t available – “guess who drove the senior bus,” she said.

“I wrote the grants for the senior programs, and I wanted to keep them viable, so I drove the seniors to the grocery store,” she said.

Early on, Reinertsen obtained her required certifications from Rutgers University. She went to work for the larger township of Kenilworth in 2014 because it offered new opportunities, she said. But the change also required some mindset adjustments, she said.

“When the mail came in, I tried to take it all, and they were like, no, that’s not for you. That one’s for the engineering department, and that’s for building,” she said. “I was like, ‘Oh. I used to take care of all that.'”

Reinertsen said she was acquainted with Red Bank as a visitor, enjoying the restaurants “immensely,” going to shows and bringing her mother, who loves to fish and crab, down to the Navesink River waterfront in Marine Park on her visits from Florida.

“I had the impression that Red Bank was much bigger because of the downtown,” she said, so she’s been surprised to discover how much is packed into the town’s 1.8-square miles. When she learned of the opening for borough clerk, she said, “I was really excited, because you have so much going on here.”

Just as she had to adjust to a division of duties when she began working in Kenilworth, she’s doing something similar now, because she no longer wears the hat of town administrator, Reinertsen said.

“I was the person you went to for answers to all questions,” she said. “Here, I’m not sure where the paper clips are yet.”

To maintain “integrity” as a town’s official record keeper, Reinertsen said clerks must be “as impartial as possible,” and not get caught in political crossfire. She was not daunted, she said, by the current atmosphere in Red Bank, which is often characterized as rancorous. On her half-hour commute on the Garden State Parkway, Reinertsen said, she likes to relax with a podcast.

“I know what my job is, and I do my best to make sure everybody is compliant with what they need to do,” she said.

Though she didn’t know Borghi personally, Reinertsen said she’s “getting to know her through the files, and I’ve come to see she is very thorough. She set a great foundation for me to work off of.”