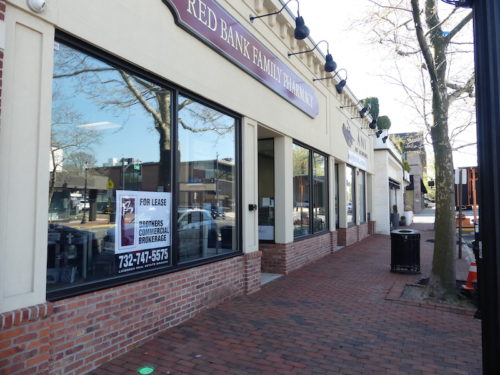 After six years in business, the Red Bank Family Pharmacy has ended operations. And the Broad Street building it which it operated has changed hands.

A message posted on the pharmacy door last week notified customers that the store had closed and that their prescription records were “available at all Walgreens,” including both in Red Bank: one in the City Centre strip mall on Water Street and the other at 395 Broad Street.

Pharmacist Kamlesh Patel, who owned two adjoining storefronts near the intersection of Harding Road, told redbankgreen Tuesday that the decision to pull the plug followed years of frustration.

“It’s just that the business, after six years, wasn’t picking up at all,” said Patel, who also owns a drugstore in Oakhurst. Why? He wishes he knew, he said.

The store adjoined Ani Art Academy, a drawing-and-painting school that operates free of charge for military veterans at 143 Broad. Kevin Moore, who runs Ani, told redbankgreen the school has no plans to move.

A limited liability company set up by Kenny Schwartz, owner of the nearby Detour Gallery on Clay Street, acquired the property from Patel on April 7 for $1.65 million, according to a deed filed with the Monmouth County Clerk.

Schwartz did not immediately respond to a request for information on his plans for the vacant space.

UPDATE: Schwartz, who lives at Detour Gallery, told redbankgreen Wednesday that he bought the building “as investment, as this area of Red Bank is transforming over the next 2 years.” The fact that it has 35 parking spaces and is “100 yards from my front door” made it more appealing, he said.

The building is next door to, and across the street from, buildings owned by Denholtz Properties.

As reported by redbankgreen, Schwartz and Denholtz clashed in late March over a property boundary along a Broad Street parking lot Denholtz was in the process of acquiring.

The lot seller, Schiff Real Property, fenced-in Schwartz’s car, leaving it immobilized for several days before a peace pact was worked out.

The pharmacy/art school property has a parking lot out back that can accommodate about 35 vehicles.