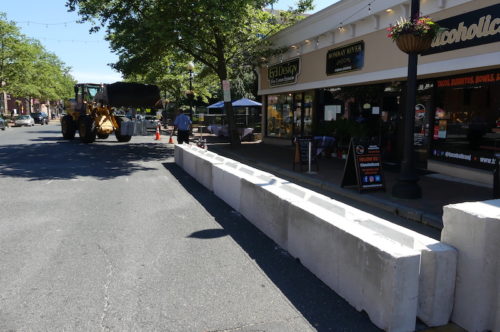 Council President Kate Triggiano, who chaired the meeting in the absence of Mayor Pasquale Menna, made a motion from the floor to allow so-called streateries outside the Broadwalk zone for third consecutive summer.

Businesses are awaiting the green light to get going, Triggiano said.

“There is a fee structure in place, if we are comfortable with it,” Triggiano said, adding that “time is of the essence.”

(Businesses in the Broadwalk zone pay $160 or $200 per month, depending on the presence of a liquor license, according to the schedule on the borough website.)

The council, however, divided along familiar lines on the issue.

Councilman Ed Zipprich and Councilwoman Angela Mirandi, attending her first-ever in-person session as a member, argued that the council doesn’t know if the fees cover the revenue that might otherwise be earned by allowing cars to use the spaces.

“We have to identify what it is in lost revenue in order to validate that the current fee structure is adequate,” said Mirandi.

She floated the idea of allowing businesses to proceed under the existing fees, with the possibility of change in the fee schedule later on, but Zipprich said that could put the borough “in an awkward position” if the fees double and merchants can’t cover them.

Triggiano said both Red Bank RiverCenter and the Red Bank Business Alliance were in favor of the moving ahead under the existing fee structure. Merchants “just want to get started” on preparations for the summer, which are already behind schedule, she said.

No representatives of the organizations were present or spoke using the Zoom call-in option at the hybrid session.

Mirandi, though, said that while quickly setting up streateries early in the pandemic was necessary because of restrictions on indoor dining, patrons can now dine indoors and in sidewalk cafés.

In addition, “non-food establishments may have concern that [restaurants] are taking parking away from the front of their establishments,” she said.

For every lost dollar of parking revenue, residential taxpayers have to come up with 60 cents, Mirandi said.

“We’ve had this going now for two years, and we have not received any negative feedback,” Triggiano said. “We have not heard from a single business that they are anti-street eatery.”

The streateries attract more visitors to town, Triggiano said. She equated the focus on the “stall by stall” fee schedule to “nickel-and-diming” that could delay the start of street dining outside the Broadwalk zone by six to eight weeks.

After 33 minutes of debate, Triggiano was unable to get a second on her motion. Her ally, Councilwoman Kathy Horgan was absent.