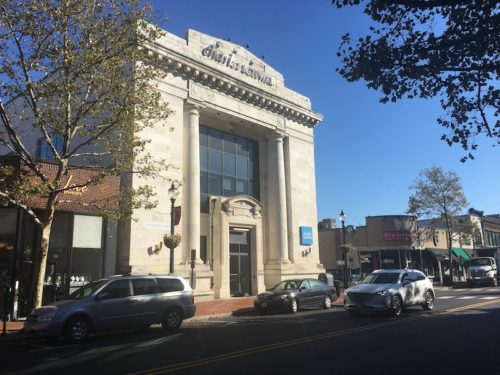 Though designed for the First National Bank, the building was occupied by Red Bank Trust Company, which absorbed First National in May 1914, just as construction was completed. (Article from Red Bank Register archive via Red Bank Public Library.)

Saxum Real Estate, based in Summit, sold the onetime bank building at 55 Broad Street for $10.7 million on October 28, according to a deed filed with Monmouth County.

The buyer was Somar Enterprises, identified in the deed as a Delaware-incorporated limited liability corporation domiciled in Fairfield, in Essex County.

Saxum acquired the circa-1914 building for $4 million in 2016, when it had fallen into disrepair after six years of vacancy. The company gutted and rebuilt the building, rebranded it as ‘The Vault,’ and landed biotech firm Provention Bio and a Charles Schwab brokerage branch as tenants.

Saxum, based in Summit, also owns the former site of the Visiting Nurse Association headquarters on Riverside Avenue, where it won approval three years ago for a 210-apartment residential project. Construction has yet to begin.

The firm also owns the building that houses an Urban Outfitters store at 2-10 Broad Street.

Saxum manager Anthony Rinaldi did not immediately respond Thursday to a redbankgreen inquiry about the status of the firm’s holdings in town. A representative for the buyer could not be located.

Here’s some history on 55 Broad.