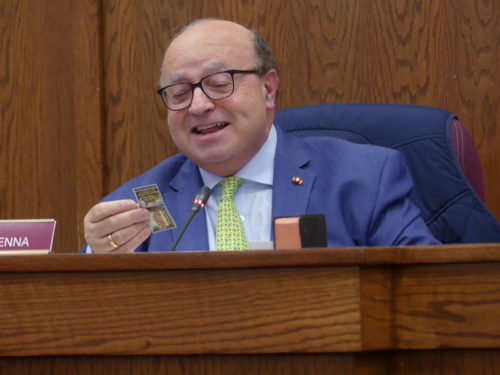 His successor will have to wait an extra four days to take up the reins of a form of government that’s also slated for retirement. 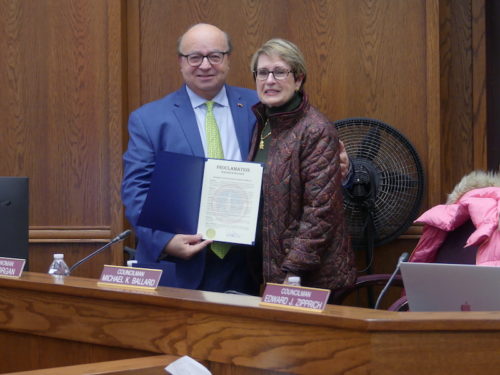 Menna with Councilwoman Kathy Horgan at the meeting, and grabbing a late-night sandwich afterward with other officials, below. (Photo by John T. Ward. Click to enlarge.)

Leading a marathon of consecutive workshop and regular sessions, Menna conducted the last scheduled, public business of his 16-year run as mayor.

That ties him with Ed McKenna, his predecessor, as the second-longest-serving mayor in the borough’s 114-year history, after Charles English, who served for 20 years beginning in 1931.

But counting his preceding 18 years as a councilman, Menna “is now the longest-serving council member [in borough history], with 34 years of service,” said former municipal clerk Pam Borghi, who gifted him with an acrylic gavel.

Among the many word bouquets tossed Menna’s way:

• Amanda Doremus, a sixth-generation resident, thanked Menna for “being there for every one of our family get-togethers with the fire department,” for which he has served as chaplain for decades. Menna said he will continue in that post if the department desires.

• Schools Superintendent Jared Rumage thanked Menna for his “spirited support” of the district and its children. Menna is a product of the borough’s public schools, and began his council career alongside a former River Street School and Red Bank High School teacher, Florence ‘Betty’ Thompson.

A boyhood immigrant from Italy via Montreal, Menna told the audience of several dozen residents that he never anticipated, “and perhaps, never wanted,” to serve three decades in town government.

“That was something that was alien to me when I started,” he said. “But somehow, it took to me, and I took to it.”

Apparently alluding in part to internecine warfare within the all-Democratic council in recent years, Menna said the town has experienced “sad moments and challenges,” but  “what doesn’t change is our commitment to each other and to our community.”

He also read a letter, sent via special delivery, from a George Washington University classmate, Peter Hollinshead, who teased him that he’d been an “awful” chief executive, worthy of “impeachment,” for failing to curtail room rates at the Molly Pitcher Inn.

As evidence, Hollinshead included an undated promotional matchbook for the hotel, from which Menna gleefully read rates as low as $2.50 per night.

Councilwoman Kathy Horgan, who was first elected in 2008 and then won four more three-year terms, also closed out her time on the governing body. She did not seek a sixth term;  her seat is to be filled by John Jackson, who was elected in November as the Democrats retained dominance.

Councilwoman Kate Triggiano praised Menna and Horgan for their institutional knowledge and for “understanding that a bridge must be built” to younger officials.

Following the four-hour meeting, Menna pulled up a seat with three council members – Horgan, Triggiano and Angela Mirandi – plus Clerk Laura Reinertsen and interim Administrator Darren McConnell, to enjoy a late-night sandwich in a conference room.

Menna’s successor, Billy Portman, a political newcomer elected in November, will have to wait an additional four days before he makes his public debut as mayor. Without explanation, Councilman Ed Zipprich made a motion to hold the borough’s reorganization meeting on Wednesday, January 4 at 6:30 p.m., instead of the customary New Year’s Day scheduling.

Horgan objected to making the event an “ordinary” night, and Triggiano, a volunteer firefighter, noted that the New Year’s event is a big deal for firefighters and their families, with dozens typically packing the room for the swearing-in of new officers. But the motion carried.

The reorganization will set the table for both another election, in just five months, of all seven governing body seats, as well as a change in the form of government, following overwhelming voter approval of an historic referendum in November.

The current “mayor-council” model in place since 1908 is to be supplanted by a “council-manager” form starting July 1, 2023. More information is available here.