Wayne Hartman at the start of his last stint as fire chief in 2019. (Photos by John T. Ward. Click to enlarge)

Just three years after he concluded his last term, Wayne Hartman is slated to return as chief of the Red Bank’s fire department next week.

This will be his third time heading the all-volunteer department. 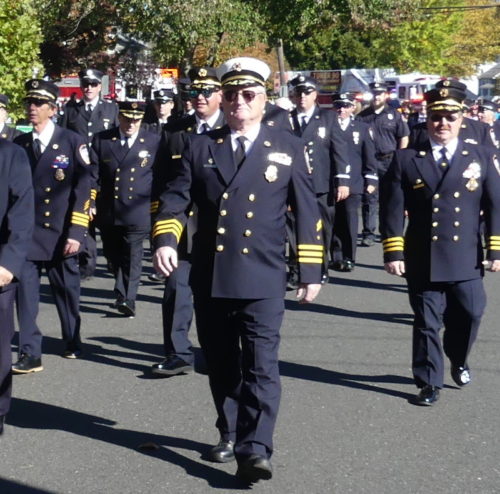 Hartman, who was voted into the position by department members earlier this month, last served as chief in 2019, and before that, in 1995. He’ll succeed Nick Ferraro.

The department’s bylaws additionally require that the chief have prior service as a chief or deputy.

As Ferraro’s first deputy, Independent Engine member T.D. Doremus had been next in command, but is recovering from an injury sustained in his job as a police officer, said Ferraro. To maintain the rotation, Independent member Hartman “stepped up,” Ferraro told redbankgreen.

Hartman said he had no reluctance about doing so.

“It’s a great thing  to do. I love it,” he told redbankgreen. “You’re out there in the community, people look up to you, I like helping the new members.”

A 68-year-old retiree from a civilian job at the Naval Weapons Station Earle, Hartman also works as a school crossing guard, at the five corners intersection of Harding Road, Hudson Avenue and Branch Avenue.

“I have a lot more time available now for the business aspects of the department,” he said.

The 150-year-old department has struggled to bring in new members, but “quite a few” are about to reach the minimum service threshold of seven years, which will make them eligible to serve as officers, Ferraro said.

“Until we get to that next wave, we are going to have to recycle some ex-chiefs,” he said. “I’m not going to lie: we’re getting by, but we’re hurting.”

Ferraro, concluding his first term as chief, said he “loved” everything about it, from the “cheesey stuff, like the sense of serving the community, the camaraderie and family,” to  “helping people on what is potentially one of the worst days” of their lives when fire occurs.

“I wouldn’t trade it for the world,” Ferraro said. “It’s kind of bittersweet that it’s coming to an end.”

A swearing-in ceremony for Red Bank’s fire chiefs is to be held during the municipal government reorganization scheduled for Wednesday, January 4, at 6:30 p.m., in the council chamber at borough hall, 90 Monmouth Street.