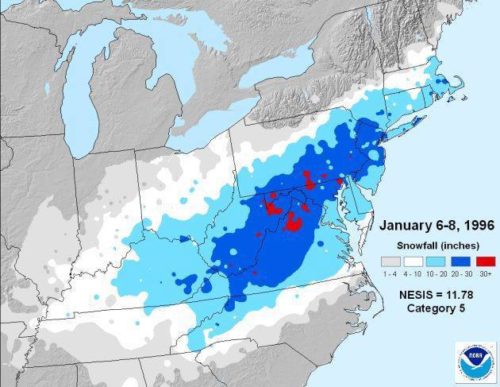 No, that’s not a forecast map. It depicts snowfall totals from the three-day blizzard that ended 25 years ago today, in 1996. The northeaster is one of only two storms to be classified as “extreme” on the Northeast Snowfall Impact Scale,” a measure of intensity. Who remembers that whopper?

By contrast, the coming weekend will be “tranquil (some would say boring,” with “plenty of sunshine and near-normal temps,” according to a tweet Friday by the National Weather Service‘s Mount Holly office. Check out the extended forecast below. (PNWS visual. Click to enlarge.)