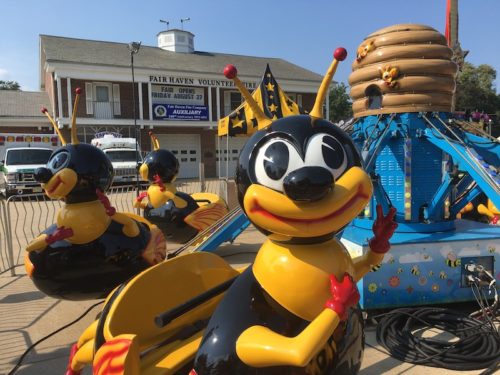 Rumbling back into Fair Haven Friday night after missing out on 2020: the summer-ending food-and-fun extravaganza known as the Fair Haven Firemen’s Fair.

Here’s what you need to know if you’re going.

END_OF_DOCUMENT_TOKEN_TO_BE_REPLACED That sparkler of news, another sign of the waning COVID-19 pandemic, came amid council action on the budget, cannabis, waterfront property and more.

END_OF_DOCUMENT_TOKEN_TO_BE_REPLACED The first night of the annual Fair Haven Firemen’s Fair, which returned Friday night is about neighbors re-connecting, kids returning from summer camp to discuss the upcoming school year behind the firehouse, babies being introduced to a rite of passage, and borough residents seeing one another once again maybe for the first and only time of the year. Most of the kids will go to bed with a sugar high as they all seemed to be carrying cones of cotton candy bigger than their heads. The beer flowed pretty freely as well….same as last year.

The fair continues nightly until August 30, except for Sunday, when it is idle. And out photo coverage continues just around the “read more” corner. (Photo by Susan Ericson. Click to enlarge)

END_OF_DOCUMENT_TOKEN_TO_BE_REPLACED The Sea Bright Firemen’s Fair brings cheer to the oceanside town this weekend s it works to recover from Hurricane Sandy. Folk musicians the Blind Tellers, below, are at the Red Bank Public Library. (Click to enlarge)

RED BANK: Stores, restaurants and some unexpected places combine to create a townwide art exhibit for Art Walk. Make your own self-guided tour or shadow docents as they guide the crowd through town. The exhibit runs from 6 to 9 p.m. Heres the map: artwalk_map_only-1

END_OF_DOCUMENT_TOKEN_TO_BE_REPLACED Undaunted by the damage inflicted by Hurricane Sandy, the Sea Bright Firemen’s Fair returns this week. (Click to enlarge)

For residents of Sea Bright  many of whom remain displaced post-Hurricane Sandy  the sight of the flashing lights of a Ferris wheel shining through the air of their recovering community will mean more than just music, games and funnel cake when the Firemens Fair comes to town later this week.

This year, it will be another sign that things are slowly returning to normal in the small beachside borough.

END_OF_DOCUMENT_TOKEN_TO_BE_REPLACED END_OF_DOCUMENT_TOKEN_TO_BE_REPLACED

FIRED UP FOR THE FAIR HAVEN FAIR There’s just enough room to squeeze between the rides and booths that pack the grounds of the Fire Haven firehouse for the annual Firemen’s Fair, touted as the largest such event in New Jersey. On Tuesday, volunteers oiled gears on a truck-themed  merry-go-round and hosed down each car of the ferris wheel, which can be seen from far down River Road.

The fair kicks off Friday at 6 p.m. and runs nightly through September 1, except on Sundays. (Photo by Stacie Fanelli. Click to enlarge.) After a hurricane-induced sputtering start, the eight-day Fair Haven Firemen’s Fair enters the home stretch Wednesday night with with an outlook of uninterrupted fun, food and pleasant weather.

The National Weather Service forecasts sunshiney days Wednesday through Saturday, with cool, moisture-free nights through Friday, and a 30-percent chance of rain on the fair’s final night Saturday.

Were you there Tuesday night? Check out the redbankgreen slideshow after the jump…

END_OF_DOCUMENT_TOKEN_TO_BE_REPLACED

BEATING THE HEAT AT THE FIREHOUSE

It was a steamy Tuesday night in Fair Haven.

Thankfully there were rollercoasters and ice cream cones to cool things off a bit, and the locals indulged. redbankgreen strolled through the Fair Haven Firemen’s Fair to grab some shots of the action.

The fair continues through the week, and wraps up Saturday night.

SETTING UP A FIREMAN’S FUNHOUSE The Fair Haven Firemen’s Fair kicks off a week from today, and workers have been busy setting up the rides, food stands and, apparently, making sure the place is well-ventilated. (Photo by Peter Lindner; click to enlarge)