RED BANK: A SPRITZ OR TWO OF SPRING 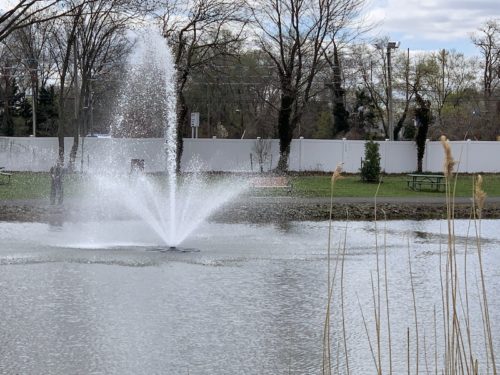 The Greater Red Bank Green may see a spritz or two of rain Monday and again later in the week, according to the National Weather Service. Check out the extended forecast below. (redbankgreen photo. Click to enlarge.)

END_OF_DOCUMENT_TOKEN_TO_BE_REPLACED James Tulley of Asbury Park shows off his catch from the first day of trout fishing at Red Bank’s Mohawk Pond Saturday morning. “All the guys come out and laugh and joke and get in some fishing,” said Tulley, who stops at the pond every year on opening day.

The the New Jersey Division of Fish and Wildlife does an annual restocking of the pond with trout. (Photos by John T. Ward. Click to enlarge) About a dozen members of Monmouth County sportsmen’s clubs turned out in a cold drizzle to clear debris and phragmites from Red Bank’s Mohawk Pond Sunday morning, in anticipation of this week’s annual restocking of the pond with trout by the New Jersey Division of Fish and Wildlife.

Afterward, participants watched a pair of ospreys soar above the pond and a admired a blue heron, right, as it fed a the pond’s western edge. According to the state, the pond is slated to receive a total 960 rainbow and brown trout this season, which opens Saturday at 8 a.m. (Photos by John T. Ward. Click to enlarge) A recent trout stocking notice at Shadow Lake in Middletown. (Click to enlarge)

If you haven’t gotten the reel ready for spring, now’s the time.

The state Division of Fish & Wildlife has announced its spring stocking schedule, and there’s plenty of trout on the menu.