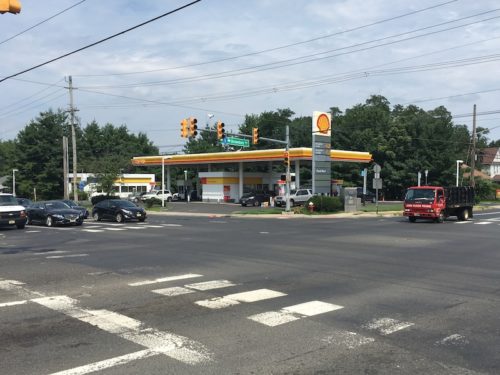 The plan called for remodeling the gas station and replacing the car wash, at left above, with a drive-thru Dunkin’ shop. (Photo by John T. Ward. Click to enlarge.)

A plan to create a Dunkin’ coffee shop in Red Bank  for Parkway-bound commuters is dead.

A lawyer for the owner of the Shell gas station at Newman Springs Road and Shrewsbury Avenue tells redbankgreen the proposal has been withdrawn.

Rick Brodsky, the attorney for station owner Waseem Chaudhary, declined to say why the plan was being iced. “They’re just sort of analyzing how to proceed,” he said of the owners.

Brodsky noted that the plan was being taken off the table “without prejudice,” meaning it could come back at a future date, though the plan would be considered new and have to start a new round of hearings if variances are needed.

The Dunkin’ (formerly Dunkin’ Donuts) was to have been run by a family business headed by Dominic Sequeira. The family also owns Dunkin’ shops in Tinton Falls and Lincroft.

Sequeira told redbankgreen Thursday that he had not be notified of the withdrawal.

Sequeira would also manage a proposed Dunkin’ in Fair Haven that has generated far more controversy. That application, by the owner of the River Road shopping anchored by an Acme supermarket, is now before the Fair Haven planning board, and scheduled to continue August 20.

The Red Bank plan called for removing both an existing convenience store and a long-disused car wash and giving the gas station a complete overhaul. The Dunkin’ drive-thru was to replace the car wash on the site’s western edge.

But at sporadic zoning board hearings that began in January, testimony centered traffic impacts and Chaudhary’s efforts to streamline the flow of vehicles through the site.

Zoning board members, however, voiced doubts that customers would obey turn restrictions, and raised concerns about about vehicles entering and leaving the site.

Former mayor Ed McKenna, the attorney for the Exxon at the intersection, had also raised issues about what he said were dangers to pedestrians walking while talking on their cellphones across the exit from the pick-up window, among other objections.

In 2013, the zoning board rejected a plan by Chaudhary to replace the car wash with a 7-Eleven store. Board members said it was “too dense.”