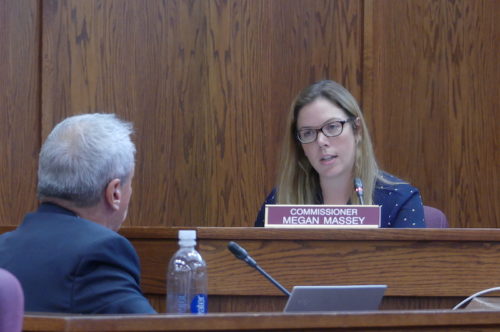 At its monthly meeting Tuesday, Commissioner Megan Massey signaled a reluctance to approve a contract that had been recommended by the agency’s manager.

At issue was a contract calling for an overview of the town in terms of areas deemed in need of either “redevelopment” or “rehabilitation” — terms of art used in state law.

Agency manager Ken DeRoberts recommended the award of a contract to ARH Associates to conduct what he called a “threshold conformance analysis,” which he described as “an evaluation of the entire borough [to] identify areas that could qualify either as in need of redevelopment or rehabilitation.”

The study “is the beginning phase” of a process under which the agency will eventually recommend to the borough council that areas be so designated in order to proceed with possible real estate makeovers, DeRoberts told the panel.

In a town that’s “two square miles, 99-percent developed, I think there are pockets of areas that could qualify,” he said. Cataloging those sites “proactively,” he said, would help keep the borough out of a situation in which it has to react to a large-scale plan by a developer, he said.

ARH, with a not-to-exceed price of about $56,000, was one of two planning firms that responded to the agency’s request for proposals to do the analysis, he said. Heyer Gruel & Associates, which is based on Broad Street, came in with a bid of $8,000.

DeRoberts said he was “surprised that Heyer Gruel came in at such a low amount.” Still, in reviewing both proposals with agency executive director (and borough business administrator) Ziad Shehady and the agency’s attorney, “the comprehensive nature of the proposal of ARH versus Heyer Gruel was very noticeable,” he said.

“ARH came very close to meeting what our expectations and needs are,” he said.

But Massey, a planner whose day job is in capital planning with New Jersey Transit, questioned why the cheaper offer was being rejected. In terms of the scope of work to be performed, the proposals were “very similar,” she said. “If you can get the same product for a ton less, why not?”

She also cited the fact that Heyer Gruel “has a presence in Red Bank, and so already has a background knowledge.”

Agency attorney Walter Denson, sitting in for partner Louis Rainone, said that based on his experience with other municipalities, he was was “very concerned” that Heyer Gruel was offering to do a comprehensive study in just 30 days.

“That’s why we felt there was a difference between the two,” he said, without mentioning how long ARH said it would take. “We felt like ARH would give us a more comprehensive look.”

Massey, though, said the difference may be that “Heyer and Gruel does a ton of this work. You can crank these out pretty quickly.” ARH, she noted, was asking the borough to provide parcel data that Heyer Gruel might already have, she said.

“That’s a huge discrepancy, between eight thousand and fifty-six,” she said.

After further discussion, the commission agreed to have DeRoberts, Denson and Massey go back to Heyer Gruel for clarification.

The nine-member agency was created earlier this year in response to a 2018 Management Enhancement Report written by DeRoberts’ consulting firm, Government Strategy Group, which found in part that borough assets were not being adequately managed and that redevelopment possibilities were being left unexplored.

The agency’s next scheduled meeting is at 4:30 p.m. Tuesday, September 25, in the council chamber at borough hall, 90 Monmouth Street.