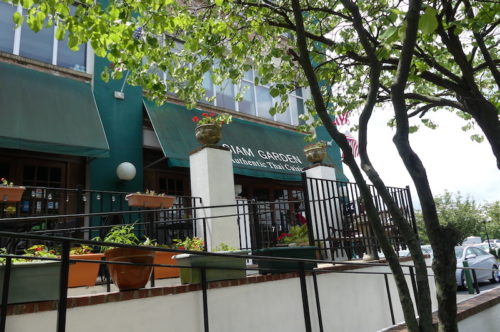 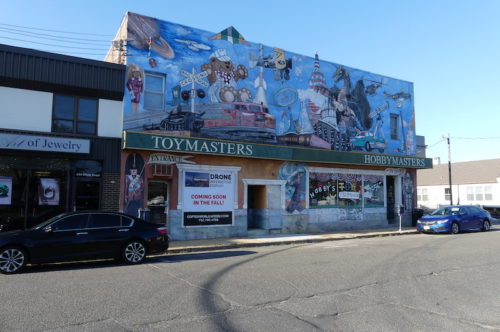 Hobbymasters plans to add an indoor mini-drone flight operation on its second floor. Below, Agencia Latina plans to open at 298 Shrewsbury Avenue, restored after a fire. (Photos by John T. Ward. Click to enlarge.)

• Restaurateur Jack Pongnoo, chef-owner of Muang Thai and Baan Khun restaurants downtown, is adding a third to his borough-based empire: Siam Paradise. Conveniently for Thai lovers, it will take over the space vacated by Siam Garden, at the corner of Bridge Avenue and West Front Street.

Pongnoo tells Churn he plans to file for a certificate of occupancy next week, and will be able to quickly open. He’ll keep both Muang Thai, on East Front Street, and Baan Khun, on Broad Street, he says.

“Big family” to employ, he says.

Assuming the permit is granted, bet on Pongnoo unveiling the place on a day with the number 9 in it. He opened both Muang Thai and Baan Kuhn on “9” days, and considers it his lucky number.

• The second floor of Hobbymasters, at 62 White Street, is set to become home to a space for mini-drone displays and test flights.

Called Chopper Shopper, the operation was approved by the borough planning office two weeks ago.

Thomas Register, a borough resident, will own the business, which centers on camera-equipped drones the size of cookies and a scale-model replica of downtown Red Bank, he tells Churn. Customers will be able to try out the devices and engage in racing.

There’s also a business-promotion aspect to the operation: downtown merchants will be able to offer discounts to Chopper Shopper patrons who use their drone skills to snap photos of coupon codes painted on the roofs of the model buildings, he said.

Lou Troisi, who manages Hobbymasters, says his store will handle sales of the drones.

The second-floor space was previously occupied by Hobbymaster’s model train business, which Troisi and owner Arlene Place have moved into the first-floor space vacated by their longtime tenant, Toymasters, which closed in late 2017.

Chopper Shopper, Troisi said, is one aspect of a recent push for diversification that has seen Hobbymasters add the services of a classic model ship restorer and an electric scooter repair technician, both as subcontractors.

Both are booming, says Placer, who’s late ex-husband started Hobbymasters as a sideline and bought the building in 1980, a year before they divorced.

“I kept this, and he got the house,” says Placer, a mother of five. “I needed a way to feed my kids, and this was the perfect way to do that.”

• Also approved by the borough last month was Agencia Latina, owned by Yorelli Ortega Romero, at 298 Shrewsbury Avenue. The business will offer money transfers, bill-paying services, copying and “snacks,” according to the filing.

The approval marks a comeback for the building, which was the site of a fire in November, 2012.

• Pella Windows is opening a store at 134-136 Broad Street this fall, according to a sign in the front window.

The building was long home to the the Professional Pharmacy, which closed in 2012, ending a 61-year run. The rear portion of the space has been home to Pilates Blast for almost two years, while the storefront has remained vacant.

• After a long dormancy, orange tables have gone in at the yet-to-open Tacoholics restaurant, at 90 Broad Street.

There was no immediate word on an opening date for the taco business, however. The space was last occupied by Sempre Cannoli, and the planning board approved Tacoholics in January.