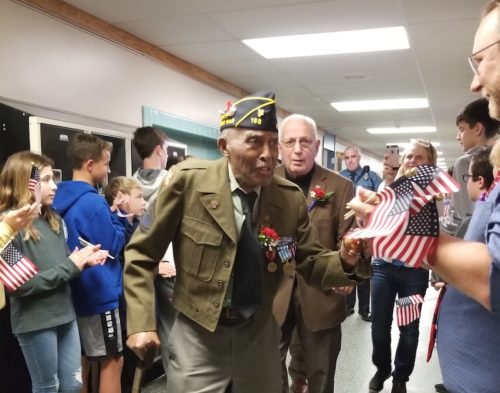 Current students were not enrolled when Knollwood School in Fair Havenb established the Wall of Honor as a way to recognize alumni who joined the Armed Forces. None were alive when the Gulf War broke out. Few students know the origin of the common peace sign, understand the war-related significance of poppies, or deeply appreciate the way “eleventh hour of the eleventh day of the eleventh month” evolved to become Veterans Day. 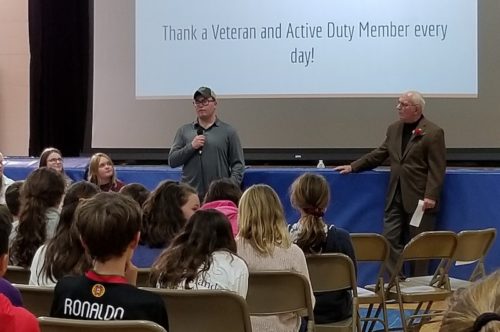 School 2013 graduate Pierson Dey, a member of 101st Airborne unit of the US Army, addressed the students along with Joe Perrotto.

On Tuesday, the past and present came together at Knollwood School as students and staff honored Veterans Day.

Joe Perrotto, a Fair Haven resident who joined the Marines right after high school graduation, explained the purpose of the school’s Wall of Honor that he conceived, and shared stories about the alumni pictured there.

Student Council members presented gifts to veterans in attendance, from a 97-year-old World War II soldier to a school alumnus from the Class of 2013.

“We wanted to bring important elements of our nation’s history to our students in ways they could understand and relate to,” Principal Amy Romano said. “Students pass by Knollwood’s Wall of Honor every day, so we built our plans around that.”

Perrotto created the wall in 2011 after extensively researching past graduates and collecting their stories and photos. Located in the school’s main hallway, the wall serves as a reminder of the sacrifice and service not only of soldiers in the five branches of the Armed Forces, but also of their families.

“Every one of those soldiers on the wall has a family,” he told students. “If you see their families, put your hand out and give them a handshake.”

Perrotto found other ways to make his presentation appeal to the fourth-, fifth- and sixth-grade students who listened attentively. As he told them about the Knollwood alumni listed on the wall, he pointed out who served in missions so elite their photos could not initially be used, and who manned fighter jets over enemy territory. He also pointed out that not all of them fit the image of a rifle-toting soldier; one is an Army doctor, while another is a pilot who drops humanitarian supplies.

Guests of honor included two of the oldest veterans living in the Borough of Fair Haven: Henry Stevens and Ray Taylor. They were recognized, as were veterans Pierson Dey, Joe Perrotto and Matthew Perrotto. Matthew was proud father Joe’s inspiration for the Wall of Honor.

Everyone entering the school saw an impressive statement of support, thanks to students who placed flags during a brief lunchtime ceremony. The honored veterans arrived to that field of flags and walked through decorated hallways lined by flag-waving students. Flag sale proceeds will be donated to the Wounded Warrior Project that offers aid to veterans and active duty service members.

In addition to the presentation, Knollwood students in the lower grades wrote letters to men and women currently serving in military roles to send the community spirit of Fair Haven by way of the written word. Perrotto told the crowd that a mailbox will be installed alongside the Wall of Honor so anyone could drop in a letter than would be forwarded to a soldier in service.