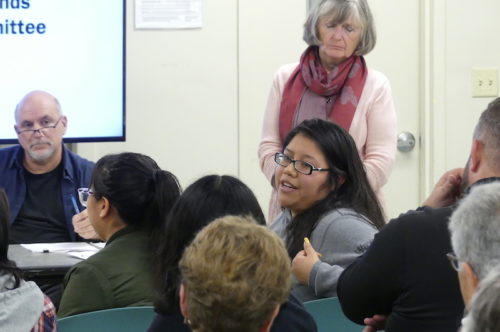 At a recent immigration forum at the Red Bank library, Yaritza Ortega told the the audience about her fears for her family. Below, protestors heading to a rally in Washington D.C. gathered at the Red Bank train station early Tuesday morning. (Photos by John T. Ward. Click to enlarge.) 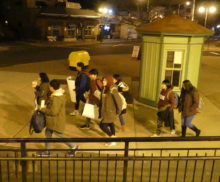 About three dozen local Dreamers and other supporters left Red Bank before dawn to join other protesters in a march for justice in the capital, hoping their presence will be noted by the court.

“The idea of justice and equality, to me, is the most American concept there is,” said Perez Hernandez, who works as an organizer for the American Friends Service Committee, at a program she co-led at the Red Bank Public Library on October 30.

Created by executive order of then-President Barack Obama in 2012, DACA offered some 800,000 immigrants who came to the United States as undocumented minors two years of protection from immediate deportation. It also gave them access to Social Security cards and driver’s license, permits to work here legally, and required them to renew their status every two years.

While polls have found that Americans favor granting citizenship to Dreamers by margins of up to 4 to 1, the SCOTUS decision is likely to hinge on whether the administration’s move to rescind the program was “arbitrary and capricious,” as challengers contend, or permissible under the federal Administrative Procedures Act.

A decision is expected next spring.

Perez Hernandez said the best, but unlikeliest, outcome of the DACA case for Dreamers would be a decision that both finds that the program was improperly terminated and opens the door to additional DACA enrollees, including siblings of Dreamers who were excluded by the program’s minimum age of 16 when it was launched.

But even under the best outcome, allowing DACA to continue “will not put forth a solid, permanent pathway to citizenship,” she said. “It still doesn’t solve our problem.”

The worst case is that the court upholds the termination, “which means we are at their mercy,” she said, of the administration.

Meantime, with the program’s fate in the hands of the court, “four thousand DACA recipients are graduating high school in New Jersey every year with no path to citizenship,” said Perez Hernandez.

Of an estimated 100,000 undocumented residents of New Jersey under the age of 25, only 22,000 have DACA protections, she said. Because they’re licensed to drive, Dreamers are are often primary providers of transportation to other family members, in addition to contributing earnings to households and serving as translators.

The burdens create an atmosphere of almost unrelenting stress in their lives, according to several Red Bank area Dreamers.

Borough resident Yaritza Ortega told the library gathering that her family had granted her power-of-attorney to make decisions for her four-year-old brother, an American citizen, in the event that her undocumented mother gets deported “and I have to become a mother” to him.

Trying be prepared helps, she said, but fear “is always there.”

With a job making pizzas at Tommy’s Tavern + Tap  in Sea Bright, he helps his 21-year-old brother support their mother, who has been unable to work recently because of an injury, and lives in constant fear of deportation.

His dream? “To not be afraid,” he told redbankgreen last week. “It’s not right for you to be living in fear day to day.”

Like Aparicio and Perez Hernandez, Deysi Avila is also active in Dreamers + organization at Brookdale, where she studies fine art while also working part-time at LaRosa’s Bakery in Shrewsbury. Her parents brought her to Red Bank from Mexico when she was 9 years old; she’s now 22, and has a 17-year-old sister who did not qualify for DACA protection, as well as a 5-year-old sister who’s a U.S. citizen.
Going to D.C., she said, she hoped to send a message “that I’m here, and I want to stay.”
Perez Hernandez, who has dual degrees in political science and national security from New Jersey City University, has become something of an expert on DACA and related issues. But she holds fast to another dream she’s put on hold: working for the FBI, doing counterterrorism work.
Meantime, she finds solace in her activism and her fellow Dreamers. It’s “an instant bond, because you have the same life experiences – the same fears, the same anxieties, and sometimes the same dreams,” Perez Hernandez said. And for her, those connections are invaluable.
“To me, the best way to process it is to speak to people who support me and care about me,” she said. “There’s something therapeutic about talking to people who fully understand.”
Here’s video of the Let’s Talk About Race presentation led by Itzel Perez Hernandez at the Red Bank Public Library on October 30. The library will also host a three-part series on ‘Becoming an American,’ starting November 13.
Posted on November 12, 2019 at 2:00 pm, filed under Crime, Economy, Family matters, Featured, Government, Immigration, Law & Justice, LITTLE SILVER, Politics, Population, RED BANK, Schools, SHREWSBURY, World Affairs and tagged American Friends Service Committee, central america, daca, dreamers, el salvador, guatamala, honduras, Immigration, itzel perez hernandez, let's talk about race, lloyd munjack, mexico, nj, policy, Politics, red bank, red bank pulic library, trump administration, undocumented aliens, yartirza ortega. Bookmark the permalink. Follow any comments here with the RSS feed for this post. Trackbacks are closed, but you can post a comment. Email this story.
PREVIOUS: RED BANK: WHITE STREET GETS TWO MURALS NEXT: LINCROFT: CURCHIN ADDS TO 15-YEAR TALLY