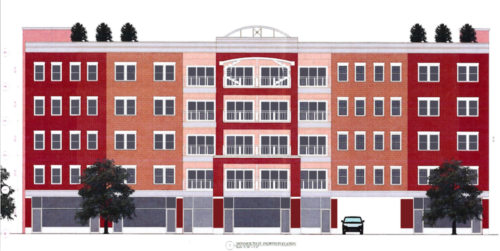 Also up for review: a restaurant instead of a laundromat on Shrewsbury Avenue. 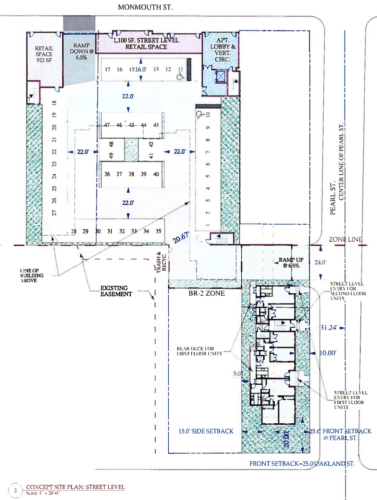 The site plan for the Salerno project, which would extend from Monmouth Street to Oakland Street. (Click to enlarge)

As previously reported by redbankgreen, Michael Salerno, who owns the office building at 121 Monmouth Street, plans to knock down that building and several others on Monmouth, Pearl and Oakland streets for the project.

Among them is 129 Monmouth, where Clemons, a the late saxophonist with Bruce Springsteen and the E Street Band, once owned a concert venue. [See related story.]

Salerno’s plan, filed with the borough in September, would put 59 rental units and 2,000 square feet of commercial “incubator” space on several lots extending from Monmouth to Oakland streets between the Red Bank Charter School and Pearl Street.

The dogleg-shaped site does not include the building at the southwest corner of Monmouth and Pearl that now houses the Pearl Street Consignment and Custom Clothes and an adjoining laundromat. It also excludes 40-42 Oakland Street, a two-family house just east of the school.

Nine of the units would be set aside as affordable under state guidelines, according to the plan. Salerno’s plan also calls for 97 parking onsite spaces, on two levels, one of them underground, including eight for commercial users.

The properties are all in the BR-1 and BR-2 business-residential zones, which permit multifamily housing.

Also on the agenda is a request by KLE Properties to amend a prior approval by creating a restaurant instead of a laundromat at 191 Shrewsbury Avenue.

The board approved the laundromat in April, 2017, as part of a project that also included four apartments. The building is now under construction next door to Juanito’s Market, whose owner, Juan Torres, is the developer.

At the time, board Engineer Ed Herrman, of T&M Associates, estimated that Torres faced a possible tab of $562,000. for hookups and a Treatment Works Approval permit required of large-scale water users by the New Jersey Department of Environmental Protection.

The requested change of use triggers the need for a further parking variance of six spaces, according to the application.