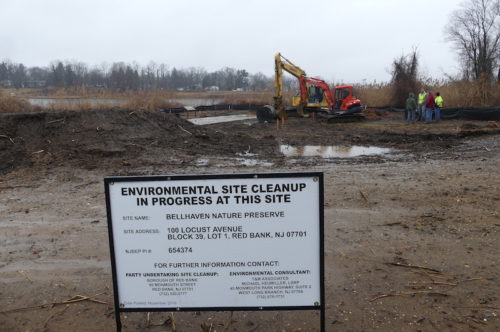 A sign alerting the public to an environmental cleanup appeared at Red Bank’s Bellhaven Natural Area a few weeks ago. 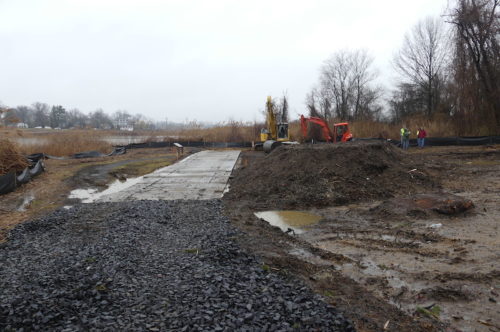 According to borough Business Administrator Ziad Shehady, a residential heating oil tank on the site was removed earlier this month from wetlands site on the Swimming River, at the western end of Locust Avenue.

Slated for installation at the 1.25-acre site are a play area, a riverfront observation deck, picnic tables and plaques conveying information about the flora and fauna there. The site is within the foraging area for bald eagles.

The deck would allow for Americans with Disabilities Act access, and include “some sort of binoculars” to enable birdwatching, T&M Associates’ consulting engineer Christine Ballard told the borough council a year ago.

The presence of the tank, which served a now-gone house on the property, had long been suspected. Oil contamination was an issue during 2015 hearings on a controversial proposal that called for a playground with a spray park on the site.

“But nobody knew for certain if the tank was still there, or if it had been removed, and if it was still there, where it was, exactly,” Shehady told redbankgreen earlier this month. “No records exist for it.”

As part of the borough’s due diligence required to obtain a $106,000 Green Acres grant from the New Jersey Department of Environmental Protection, ground-penetrating radar was used to locate and remove the tank, Shehady said.

Last time redbankgreen checked in, in October, officials expected completion by the end of 2019. Shehady said this week that the delays centered on the tank:  “identifying the exact location, finding a contractor, the change order, coordinating with the DEP, etc.”

Now, he said via email, the borough has the park equipment on hand, so “we are just waiting for consistently warmer weather to install the rubber surface” that will underlay the playing area.
That should happen by early spring, he said.