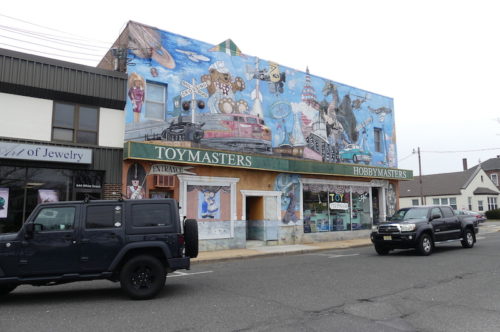 Hobbymasters, a gamers’ paradise for four decades in downtown Red Bank, is calling it quits. 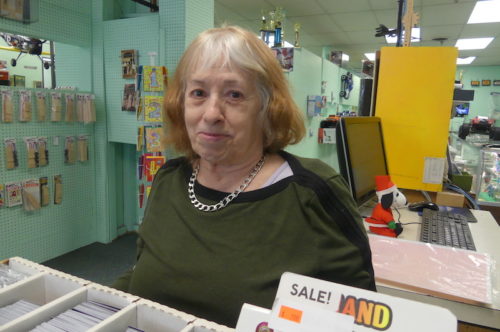 Located at 62 White Street beneath a huge, lively mural, Hobbymasters, was a mecca for lovers of electric trains, model kits, drones and more.

Once an employer of 18, the business has shrunk in recent years, largely as a result of the online shopping juggernaut that’s taken down innumerable other store-based operations, said owner Arlene Placer.

The last time redbankgreen checked in on Hobbymasters, in November, owner Arlene Placer had recently leased the second floor, once home to a popular electric train display, to a new business, called Chopper Shopper. The business model was to link indoor flying of mini-drones with… coupons for local businesses, of all things. It never got off the ground.

Now, the main selling floor at Hobbymasters is largely depleted of merchandise, as the few remaining employees manage a close-out sale, with everything priced at a 25-percent discount.

It should all be gone by the end of March, when it’s lights-out for Hobbymasters, Placer said this week.

Placer’s late ex-husband started Hobbymasters as a sideline at 90 Monmouth Street – yes, the current site of borough hall – and they bought the White Street building in 1980, a year before they divorced.

In the settlement, her ex got their house in Holmdel, and Placer opted to take the building and the business, despite having little experience with retail, because “I had no means of income” otherwise, she said.

Her brother, Charles, helped her get her footing as a retailer.

Now, with her 80th birthday coming in April, “it was getting to the point of ‘I’m tired,'” she said. That and the endless challenges of competing in the internet economy make it time to pull the batteries, she said.

Thirty-two years ago, Arlene married one of her employees, and together, they plan to continue pursuing their shared love of tornado-chasing in retirement, she said. She also keeps a full schedule of writing and history classes as an auditing student at Brookdale Community College and elsewhere, she said.

Ok, so not to be rude, given that her chair is still warm, but we have to ask: What’s going to happen to the the 11,000-square foot building, which has solar power panels on the roof?

But Bowers said he’s not yet ready to discuss his plans for the site.

The family-controlled property business owns the abutting buildings on either side of Hobbymasters, occupied by JMD Jewelry and Trap Door Escape Room, as well as others along White and Water streets and English Plaza.

The site would seem primed for redevelopment. As reported last week by redbankgreen, White Street is in for a major makeover that borough officials say will bring angled parking and streetscape improvements this year.

Among those improvements: a mid-block crossing that links the 273-spot borough owned parking lot with the north side of White Street — directly in front of the Hobbymasters building.