RED BANK: BREEZEWAY TO A ‘RETREAT’ 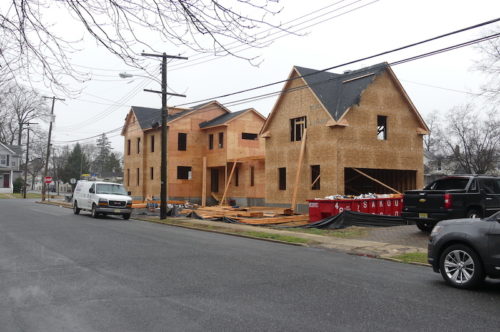 A sizable structure has begun rising at the corner of Worthley Place and Marion Street in Red Bank, on the site of a crumbling old house. 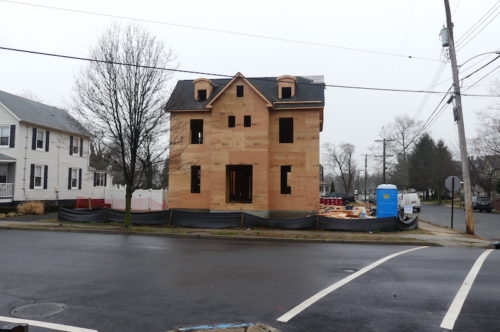 The new house, above, resembles the one it replaced, seen below in 2018. (Photos by John T. Ward. Click to enlarge.) Through his company, Edge Builders LLC of Long Branch, Chedid bought the property last June for $277,500.

Though it might appear, given its size, that a multifamily building is going in, the zoning board approved a single-family. Len Rubenstein, project manager for Edge, told the board he planned to purchase the finished house and live in it with his family.

The new house replaces a 1,700-square-foot, two-story residence and separate garage. It will connect to a two-car garage at the eastern end of the property via a one-story breezeway.

The garage will feature a second-story room “for Mr. Rubenstein to retreat to,” according to meeting minutes.

The only member of the public to speak at the hearing was Peter Carragher, of 18 Marion, who “called the existing house an eyesore and said the replacement plan was fabulous,” according to the minutes.

The zoning board’s approval was unanimous.

Neighborhood trivia: According to an article in the April 7, 1915, edition of the now-defunct Red Bank Register tracing the name of every street in town, Worthley Street was named for John Abbott Worthley. After he sold the property to Captain Thomas P. Brown, Brown cut a street through and named it Marion Street for his granddaughter, Marion Byram.

Twitter
Posted on February 13, 2020 at 2:30 pm, filed under Featured, Land Use & Zoning, Real Estate, RED BANK, What's Going On Here? and tagged nj, red bank, what's going on here. Bookmark the permalink. Follow any comments here with the RSS feed for this post. Trackbacks are closed, but you can post a comment. Email this story.
PREVIOUS: RED BANK: BIAS LAWSUIT SETTLED FOR $175K NEXT: RED BANK: WEEKEND WEATHER NOT TOO FOUL