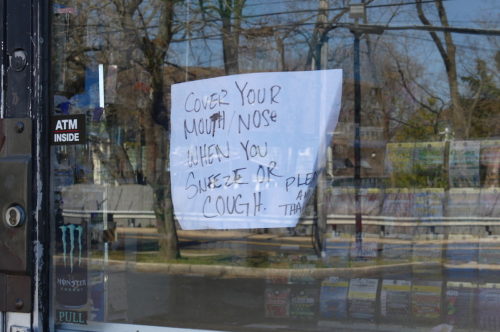 A sign on the door of the Welsh Farms convenience store on East Front Street in Red Bank. (Photo by John T. Ward. Click to enlarge.)

The following are dispatches from the Greater Red Bank Green as we settle into the widespread shutdowns and upheavals of everyday life prompted by the global COVID-19 pandemic. 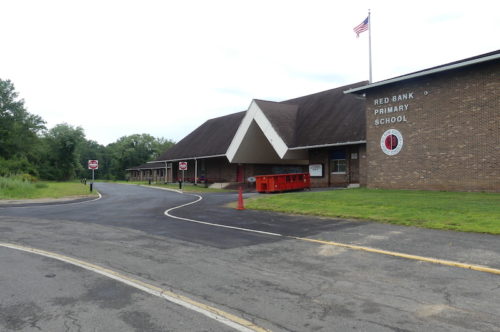 • In light of an executive order signed by Governor Phil Murphy on Monday, the borough of Red Bank has rescinded its “local state of emergency” order issued Sunday, according to a notice posted on the borough website Monday evening.

“Due to these more expansive and uniform statewide measures, the Borough of Red Bank is rescinding the State of Local Disaster Emergency dated March 15, 2020,” the notice reads. The borough “will defer to Executive Order 104 to ensure the public has a more consistent and clear understanding of the COVID-19 statewide measures.”

Murphy’s order closes all schools and colleges; limits public gatherings to 50 people; closes restaurants and bars, except for takeout and delivered orders; and shuts down movie theaters, gyms, casinos and more until further notice.

“Essential businesses” such as supermarkets and grocery stores, pharmacies, medical offices, and gas stations may remain open, under the order. Other “non-essential” businesses not listed can remain open until 8 p.m. if they attract 50 or fewer people and attendees stay six feet apart.

• All Red Bank residents under the age of 18 are eligible for free “grab ‘n go” breakfasts and lunches under a program announced by the public schools. The same is true for all students from Red Bank Regional High’s other two sending districts, Little Silver and Shrewsbury.

Meals will be be distributed at the Red Bank Primary School on River Street and the Red Bank Middle School on Harding Road. Students must be present to receive meals.

Here are the pickup  times and number of meals available:

Red Bank Charter School families were directed to the YMCA on Maple Avenue for pickups, on the same schedule as above.

• Though Fair Haven has shut down its borough hall, the council meeting scheduled for Monday, March 23 is still on. The public, however, “will not be permitted to attend the meeting in person,” and the session will be livestreamed, according to a notice on the town website.

The agenda “will be limited to essential borough business only,” the notification says.

At its last meeting, on March 9, the council tabled a vote on a controversial $3.4 purchase of a River Road office building as the possible site of a new borough hall and police station. In advance of that action, the borough posted a notice on its website stating that no action would be taken on the issue and told residents, “you will have a chance to have your voice heard at a future meeting, when the threat of the coronavirus is no longer a concern.”

Mayor Ben Lucarelli told redbankgreen Monday that another presentation on the proposal would be made prior to a vote at a future council meeting at which the public is present.

Noting that Murphy’s order cited a Centers for Disease Control recommendation that gatherings of 50 or more people be postponed for “the next eight weeks,” Lucarelli said the meeting may not be in the immediate future.

• St. James Church in Red Bank has canceled all Masses, as per action by Bishop David M. O’Connell suspending all public Masses throughout the Diocese of Trenton through April.

Over the weekend, the church maintained its regular worship service, but asked those who were not feeling well or were members of high-risk groups to stay home. In an announcement Monday afternoon, St. James said O’Connell “has granted dispensation to the faithful from their obligation” to attend weekend mass, and recommended they participate in livestreamed or archived masses on television. A list can be found here.

In addition, the St. James Rectory will be closed Tuesday until further
notice, the announcement said. Business will be conducted via telephone between the hours of 9 a.m. to 1 p.m. or via email: saintjamesredbank@st.james-redbank.com.

• Starting Tuesday, the owner of The Cellar in Fair Haven and the Little Silver Bottle Shop in Little Silver will temporarily switch to delivery-only service. The change means “the immediate temporary suspension of walk-in service,” the parent company said in a press release.

“We treasure our community and our employees. Our number one priority is their safety and well-being while at our stores,” said Little Silver Liquors Inc. president William G. Kenney. “At this time, we have assessed that the risk of communal spread of the novel coronavirus far outweighs any potential fiscal benefit of continuing business as usual.”

Details will be posted at the stores and announced on the company’s Instagram pages: @lsbottleshop and @thecellar_fh.

• [UPDATE: On Tuesday, Booskerdoo announced it would temporarily close its stores effective 3 p.m.]  Booskerdoo Coffee & Baking, which has a café in Fair Haven, remains open – literally.

“All doors will be propped open” to minimize customers touching door handles, the company said an email announcement.

The shop is also temporarily limiting access to four customers at a time; halting use of its self-serve coffee urns; and no longer offering refills in customers’ own reusable cups, among other measures, it said.

• The YMCA of Greater Monmouth County, shut down by Murphy’s order, is encouraging members to work out to videos posted on its website.

Two videos have been posted and more are planned.

• The Salvation Army’s Red Bank Corps will continue to run its food pantry appointments. Call 732 747-1626, extension 404, to schedule an appointment.