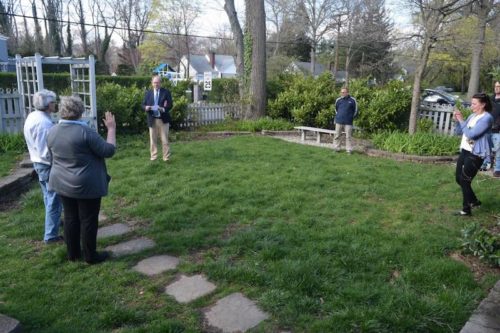 Mayor Bob Neff, joined by three council members standing far apart from one another, swears in Stephanie Keenan in her backyard April 9. (Photo by Elizabeth Keenan. Click to enlarge.)

After what was probably the first socially distanced, backyard swearing-in ceremony in borough history, the Little Silver council will have a new member when it meets via Zoom Monday night. 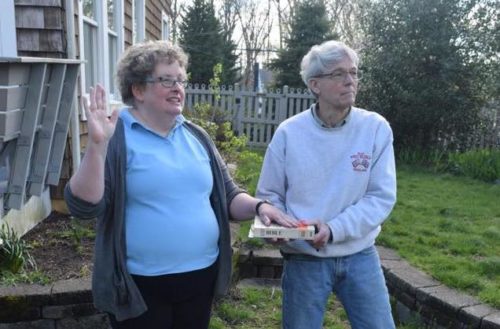 Keenan recites the oath of office as her husband, Jim, holds the Bible. (Photo by Elizabeth Keenan. Click to enlarge.)

Democrat Stephanie Keenan replaces Chris Healy, who announced his resignation January 27, effective March 30. He had 10 months to go on his first, three-year term.

Keenan, who ran an unsuccessful campaign for a council seat in 2018, was chosen by the council April 6 from three nominees proffered by the Little Silver Democrats.

“I’m fairly certain this was the only backyard swearing in that Little Silver has ever had,” she told redbankgreen by email.

“We spread ourselves around the yard, so everyone had plenty of social distance,” she said. “To minimize contact, I even used my own Bible.”

Like Healy, Keenan will be the only Democrat on the governing body, where she hopes to bring another viewpoint to the mix. And she said she’s “ready to give it another go” by seeking a full term in the November election on a ticket with municipal committee co-chair and Little Silver Democratic Club president Joan Gotti.

But first, when she logs on as a member Monday night for her debut as a member, the council plans to review the proposed budget, so “I guess I will be starting in the deep end,” Keenan said.