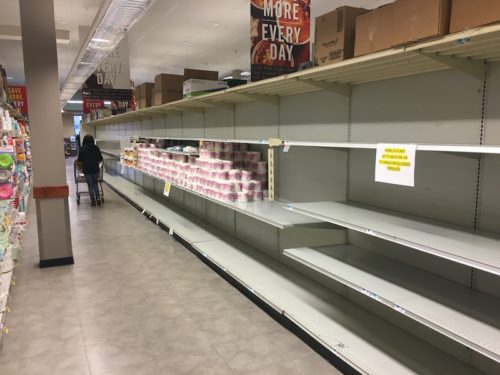 A common sight in the pandemic: sparsely stocked paper products at the Red Bank SuperFoodtown earlier this week. (Photo by John T. Ward. Click to enlarge.)

The COVID-19 strain on hospitals showed signs of easing even as the death toll surpassed five times the number of New Jerseyans killed in the September 11, 2001 terror attacks, Governor Phil Murphy said Friday.

At the same time, data suggests that while the peak of the crisis has now occurred in the northern end of the state, it’s still “coming” to the central and southern regions, said state health Commissioner Judy Persichilli.

At his latest daily briefing on the crisis, Murphy disclosed 323 more deaths in the pandemic, for a total of 3,840 since March 10.

At the same time, the number of COVID-19 patients hospitalized declined and the increase in new positive tests slowed.

Persichilli voiced “cautious optimism” that the battle is slowly being won, while Murphy told residents they need to continue observing stay-home orders and social distancing for at least another month.

“We expect to be very busy through April and into the beginning of May,” Persichilli said. “In the north, we have seen the peak” of new cases, “and in central and south we have not seen it. It’s coming.”

“We have come a long way, but we can’t let up until we have ridden the curve all the way down,” Murphy said.

“I know we are stir-crazy, but we are breaking the back of a once-in-a-century killer here,” he said.

The death toll included another 16 lives lost in Monmouth County, where 206 virus-related fatalities have now been recorded, according to the state health department’s COVID-19 online database.

Persichilli said new data that shows the crushing impact the pandemic has had on longterm care facilities.

Of Monmouth County’s deaths, 114, or 55 percent, have occurred at longterm care facilities, the data show. Forty such facilities have reported 782 positive cases within the county, Persichilli said.

Deaths in the monthlong pandemic: 3,840, up 323 from Thursday’s update and double the number who had died a week ago