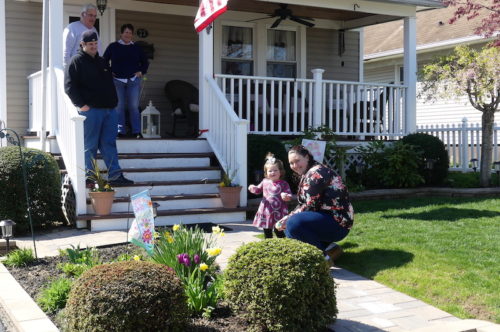 The Lauterwassers and Craigs outside their Red Bank home Friday morning. (Photo by John T. Ward. Click to enlarge.)

If the official figure is accurate, one household accounts for about 6 percent of Red Bank’s 87 COVID-19 cases.

The good news: all four adults in the East Westside Avenue house are now healthy and anxious to go back to work, having “dodged a bullet,” and the lone child there quickly rebounded, they told redbankgreen Friday. 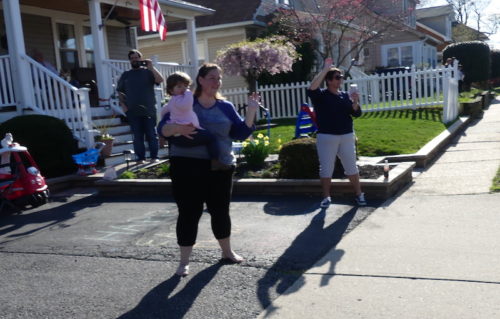 Family members cheered on the Bunny Parade as it passed their home April 8. (Photo by John T. Ward. Click to enlarge.)

The home in question is the residence of Dianna Lauterwasser and her husband, former borough fire chief George Lauterwasser. They share it with their daughter, Amanda Craig; her husband, Nick Craig; and 18-month granddaughter, Emmalynn.

It was there that redbankgreen learned of the family’s situation during the Bunny Parade put on by borough Parks & Rec and firefighters last week in lieu of the annual Easter Egg hunt.

“It,” of course, is COVID-19. Turns out the family has been self-isolated since since March 23, when Nick came home from work suffering a fever and body aches.

He was able to get tested two days later at the newly-opened drive-thru testing facility at the PNC Arts Center in Holmdel, and just a day later was informed the result was positive. His symptoms took several days to tame.

Next to fall ill was George, who experienced tightness in his chest. He got tested mainly because of his proximity to Nick.

“We actually thought he was going to be negative, because after a couple of days, the tightness went away, and he only had a little bit of a cough that he thought was from a post-nasal drip,” Dianna said.

But a week passed before George received his test result, because his phone number had been mis-entered into the record system, Dianna said. Outcome: positive.

Of all who became ill, Dianna said, she was most fearful for her husband because of his age, 68, and because he has other health conditions.

“I was more concerned about him than the rest of us,” she said. “We did keep him isolated, so we were taking him his meals and making sure we wore masks and gloves and all that.”

Over the weekend of March 28, as Nick and George were laid up, Dianna and Amanda began experiencing symptoms of what they thought were sinus infections, Dianna said: sinus pain, nasal congestion, ear aches. Each called her doctor, and the doctors agreed with their assessments, prescribing antibiotics for sinus infections.

Over the ensuing days, “Amanda felt so-so,” with some dizzyness and tightness in her chest, Dianna said. Diana never had chills or aches herself, she said. “I just felt… crappy. There isn’t another word for it. I just didn’t feel good.”

So the women drove to the PNC center, where they waited about two hours to be tested, patient numbers 203 and 204 in a long line of vehicles. Their results also came back positive, though Dianna was already beginning to feel better by then.

The coronavirus also is presumed to have infected Emmalynn, who awoke from a nap early on in Nick’s illness with a slight fever, Dianna said. Amanda took the child to her pediatrician, who did not test her for coronavirus, but told Amanda that she probably had it and, like most other children, would in all likelihood get better soon.

“She ran a fever for a day and half, had a runny nose, and that was it,” Dianna said.

“We were just very lucky,” Nick said as redbankgreen snapped another photo from a safe distance Friday, this time post-illness. “We dodged the bullet.”

With each new positive, the adults had to tack on two more weeks past the point of their last symptoms before it would be safe to be with other people, under guidelines issued by the Centers for Disease Control.

So on Easter Sunday, with more than a week of quarantining still to go, the family “did a drive-by,” parking outside the home of Dianna’s 81-year-old mother in Wall Township “so she could see the baby” from the porch.

“We all feel fine now,” Dianna said Friday. The family is free to return to work: Dianna at the Naval Weapons Station Earle, where she works in the housing department; George with PATH system, where he’s a sanitation supervisor; and Nick, who works with the underground-infrastructure firm Utiliquest. Both Nick and George’s jobs are classified as essential, Dianna said.

Amanda, a teacher at the Shore Center for Students with Autism in Tinton Falls, has already resumed work via the internet.

Meantime, the family is “absolutely” experiencing cabin fever, only venturing out into the yard, walking the dog or going for short walks, keeping well away from other pedestrians.

“If anybody else is out, we turn the other way or cross the street,” Dianna said.

Of course, the vast majority of patients who become infected recover, while others experience severe or even fatal symptoms. So far in the the pandemic, COVID-19 is believed to have killed or hastened the deaths of 153,000 people worldwide, including 3,840  in New Jersey and 206 in Monmouth County.

Still, “we consider ourselves extremely lucky,” she said. “There but for the grace of God go we.”

Though the testing made no difference to the course of their illnesses, Dianna is relieved that it may have prevented her from passing on the coronavirus to others.

“If George and Nick hadn’t tested positive, Amanda and I would have just assumed we had sinus infections, and would have been out infecting half the world,” she said. “It’s not the classic ‘fever, cough, body ache’ symptoms that they keep putting out there.”