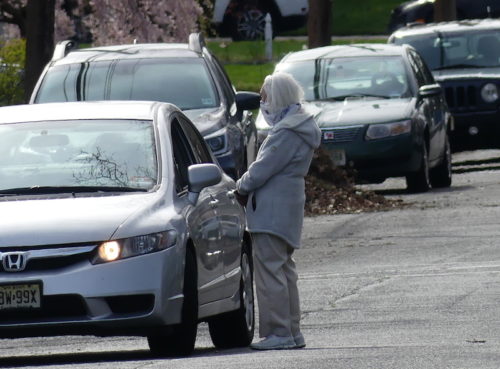 A woman with her face covered by a scarf speaks with a motorist on Elm Place in Red Bank Tuesday. (Photo by John T. Ward. Click to enlarge.)

An awful “paradox” was evident as deaths from COVID-19 soared and the number of new cases continued to ease in New Jersey, Governor Phil Murphy said Wednesday.

The state’s death toll in the pandemic rose by 275, to 1,504, since his last daily briefing on the crisis Tuesday, Murphy said.

The increase, which may include earlier deaths belatedly reported to the state, was the largest yet in the monthlong battle.

In Monmouth County, 15 more deaths pushed the total to 86 residents, the state reported on its COVID-19 web page, also the greatest single-day increase for the county.

The latest data reflect a “paradox,” Murphy said: a “flattening” of new cases while “the awful fatalities continue to spike.”

“We’re not on any ‘plateau,'” he said. “We need to continue to be absolutely vigilant and, if anything, tighten rather than loosen” restrictions on movement and business activity in order to slow the spread of the disease-causing coronavirus, he said.

Of 7,026 individuals hospitalized for COVID-19 across the state as of Wednesday, 22 percent, or 1,617, were in intensive care, and 97 percent of those patients were on lifesaving ventilators, said state Health Commissioner Judith Persichilli.

So far, he said on Twitter, hospitals have increased potential bed capacity by 60 percent. Hackensack Meridian system, which includes Red Bank’s Riverview Medical Center, had tripled its “negative pressure beds” from 278 to 869, he said at his press briefing. He did not share information about individual facilities.

As of Wednesday, 47,437 state residents are known to have tested positive. Another 52,979 residents who presented COVID-19 symptoms have tested negative, the state reported.

• Murphy postponed the June 2 primary elections to July 7, and raised the possibility of an all mail-in election.

• He also ordered that everyone who enters a supermarket wear protective face coverings.

• He also ordered a stop to all non-essential construction work.

• Addressing pushback on his decision Tuesday to close all state and county parks while allowing municipalities to decide regarding their parks, Murphy said he doesn’t expect to reverse himself.

UPDATE: Monmouth County freeholders reported 3,042 cases in the county Wednesday afternoon, up 242 in one day. Here’s the by-town breakdown: