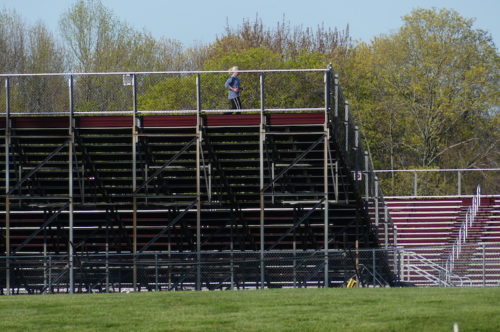 A runner had the grandstand at Red Bank Regional in Little Silver all to herself for some socially distanced stair-climbing Tuesday. (Photo by John T. Ward. Click to enlarge.)

The increase, to 7,228, was by far the single largest jump in fatalities reported since the crisis began seven weeks ago. Speaking at Murphy’s daily briefing on the crisis, state Communicable Disease Service Medical Director Dr. Edward Lifshitz said some of the increase was the result of data adjustments going back in time, as well as deaths that occurred between Wednesday and Thursday.

“Today was an unusual jump due to essentially catching up with data that’s coming in,” he said. He did not specify how many fell into each category, however, or if deaths previously attributed to other causes had been reclassified.

Still, “this is a very sobering number,” Murphy said of the tally.

More than 1,200 deaths have been disclosed since Monday.

According to the state health department’s COVID-19 online database, Monmouth County’s loss of life rose by 24 victims, to 341. Five more deaths at longterm care facilities in the county were reported on the site, for a total of 210.

Murphy said 69,200 tested residents have exited the two-week incubation period for the disease in the past two two weeks, 20,000 more than have received positive results.

State Health Commissioner Judy Persichilli said the number of patients hospitalized was at its lowest level since April 2, with the peak of about 8,200 on April 14.

“We have seen a flattening since then, and a decline this week,” she said. But the number of patients needing critical care “is basically staying the same,” she said.

Administration officials continued to note the “migration” of the illness from north to south. And with spring weather coinciding with Murphy’s decision Wednesday to reopen parks, “this upcoming weekend is a crucial test, and this is a test we must past,” he said.

“We are placing tremendous trust in you to keep up your social distancing,” he said, addressing the public. “If we see this weekend what we saw that first weekend in April, I will not hesitate to reverse course and close our parks again.”