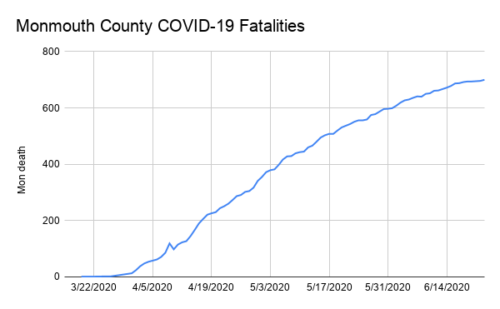 One hundred of Monmouth County’s fatalities have been reported since June 1. Below, a map shows the number of COVID-19 deaths per 100,000 population by county; the statewide figure is 147. (New Jersey Health Department data. Click to enlarge.) 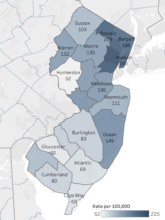 The milestone was crossed amid a widespread, yet legally restrained, reopening of the economy and a continued slowdown in hospitalizations and deaths across New Jersey.

Statewide, the death toll stood at 12,949 Tuesday, according to the department’s online database.

“It can never be only about the numbers,” Murphy said at his daily briefing on the crisis. “These are almost now  13,000 extraordinary lives lost” statewide, and “we must never lose sight of how personal this is for so many in the state,” he said.

The figures include 502 fatalities associated with longterm care facilities in Monmouth County: 495 of the victims residents of those centers, and 7 staff workers, according to state data.

Nearly 72 percent of the county’s 700 deaths since the first on March 14 have been associated with LTC facilities, according to the database.

In Red Bank, the Hackensack Meridian care facility on Chapin Avenue has had 16 resident deaths, up 1 from June 5, a separate state report showed. The town’s only other LTC facility, the Atrium at Navesink Harbor on Riverside Avenue, has reported 1 fatality, a figure that has remained unchanged for several weeks.

[UPDATE] Separately, Monmouth County’s government reported it has had 9,131 confirmed COVID-19 cases since the pandemic began in early March.

Here are the cumulative totals by town: