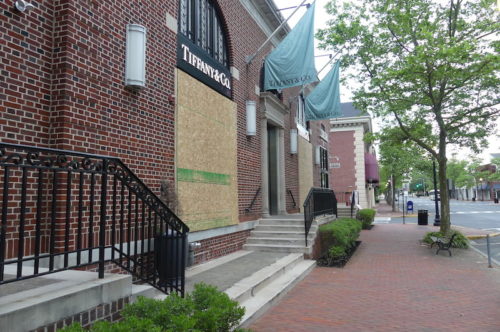 The windows on the Tiffany & Co. store in downtown Red Bank were boarded up Tuesday morning. (Photo by John T. Ward. Click to enlarge.) 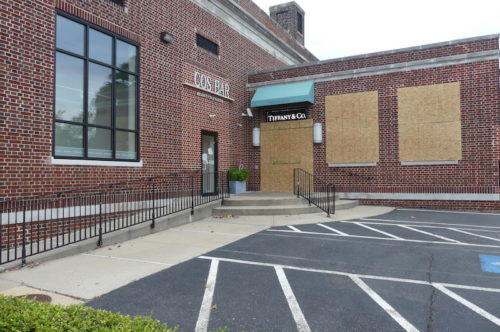 The rear entrance and windows of the Tiffany store were boarded over, while neighbor Cos Bar was not. (Photo by John T. Ward. Click to enlarge.)

An explanation for the action was not immediately available. Police Chief Darren McConnell told redbankgreen said he not confirmed a report that the move was a corporate decision to protect many if not all stores in the Tiffany chain.

McConnell said there have been no incidents at the store, on Broad Street at the corner of Canal Street.

The luxury goods retailer has been closed since the general lockdown of non-essential business to slow the spread of COVID-19 began in March. A notice posted on the heavy stainless-steel front door says the store is open for curbside pickup of orders.

Neither of the two stores that flank Tiffany in the building, the Lash Lounge and Cos Bar, were boarded up. redbankgreen saw no other stores boarded up on a quick swing through the business district early Tuesday.

Unlike cities across America, including Asbury Park, Red Bank has had no large protests or unrest in the wake of the killing of George Floyd in Minneapolis.

But Tiffany has been impacted elsewhere. According to the Washington Post, a company store in the District of Columbia was among a number of businesses whose windows were smashed in unrest over the weekend.

At Tiffany, our values include tolerance, respect and an unwavering dedication to diversity and inclusion. We stand in solidarity with our employees, customers and creative collaborators to take action. The responsibility is on all of us and we pledge to continue sharing our ongoing efforts.

In New York City, Tiffany was among a number of high-end stores that were boarded up a month ago to prevent break-ins during their closure in the COVID-19 pandemic, according to amNY.

Tiffany is a tenant in the Red Bank building, a former post office owned by luxury clothier Garmany, located next door.