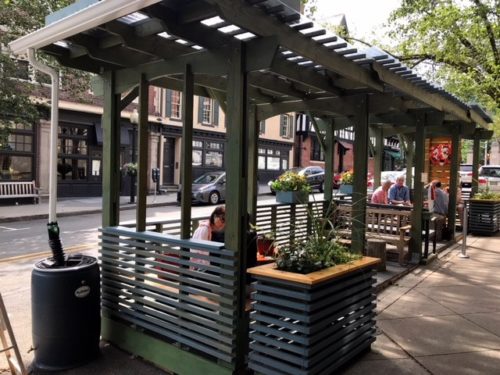 Among a series of adjustments, Red Bank’s economic reopening committee has scrapped the Sunday pedestrian plaza on Monmouth Street.

Instead, the Broad Street plaza, which has drawn large turnouts three nights a week since debuting June 18, will become a four-day affair with the addition of Sunday operations starting this weekend, Red Bank RiverCenter executive director Laura Kirkpatrick tells redbankgreen.

At the same time, plans are in the works for “parklets,” or temporary seating structures, to be built in parking spots outside a handful of downtown restaurants, including three that participated in the aborted Monmouth Street plaza effort. 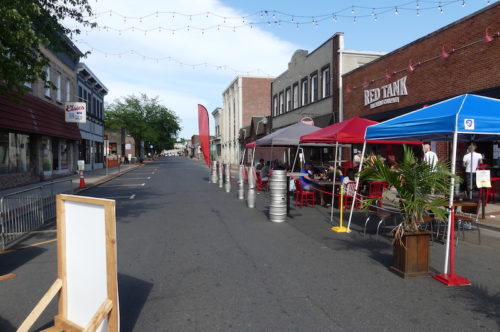 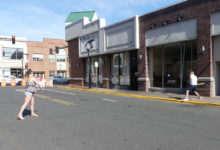 The Monmouth Street plaza, involving all-day shutdowns to vehicular traffic on Sundays, “hasn’t been drawing in an adequate number of diners and shoppers,” said Kirkpatrick, who also serves on the borough-hosted Reopening Task Force.

“Several business owners and managers spoke with me about how the closure was not working for them,” she said. “Only a few retailers were open; most opted to take Sundays off.”

Only three restaurants – Jamian’s Food and Drink; its next-door neighbor Red Tank Brewing; and Ce La Vie, located several hundred yards to the east – took advantage of the opportunity to set up tables in the street.

On each of the three Sunday afternoons the plaza was in effect, a group of adults could be seen playing wiffleball in the street, barely interrupted by pedestrians.

By contrast, the Broad Street pedestrian plazas, operating between Wallace and Front streets from Thursday through Saturday, have packed the in-street seating areas of a handful of restaurants, with a small but growing number of retailers staying open in the evening.

At last week’s borough council workshop meeting, Business Administrator Ziad Shehady said the the COVID-19 pandemic had “heightened the desire” of some businesses to install parklets, also sometimes referred to as “streateries,” in front of their restaurants.

With the informal consent of the council, Shehady said he would work with the police, code enforcement and the borough attorney to draw up “guidelines to ensure pedestrian safety and compliance with the Americans with Disabilities Act.”

Kirkpatrick said she was working with Jamian’s, Red Tank and Ce La Vi to expedite their interest in setting up parklets.

In addition, she said, Bombay River, located on Broad Street south of the plaza zone, and Semolina,  on White Street, also play to apply for the set-asides, she said.

Any other business in the Special Improvement District for which RiverCenter is the manager that wishes to have a parket should contact her, Kirkpatrick said.

“It seems like a no-brainer, just another thing to offer the restaurants, especially those that are outside the pedestrian plazas” on Broad and Monmouth streets, Councilwoman Kate Triggiano said at the council session.

“I just think it’s a great idea even post-pandemic,” she said.