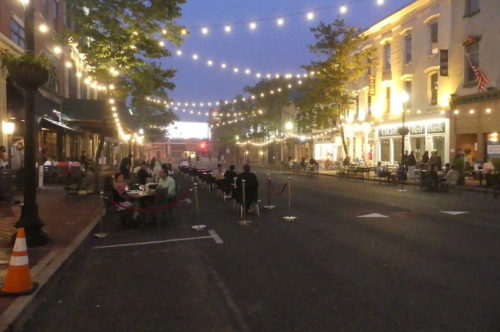 Among the customers were Governor Phil Murphy and First Lady Tammy Murphy, with their son, Josh, having dinner at Char, at right. 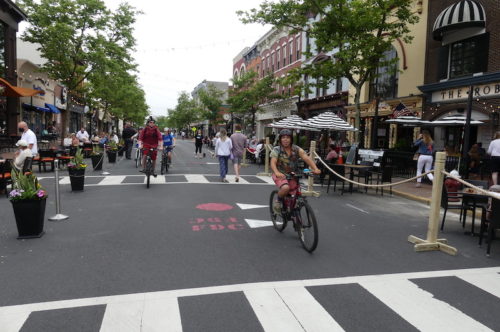 Kids on bikes, dog walkers and just-curious pedestrians strolled between areas set off for curbside dining. Below, concrete barricades set up at the plaza’s south end, at Wallace Street. 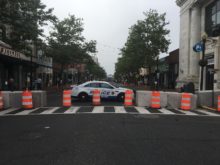 Seven restaurants participated in the first-ever closure of the street for this purpose, including two close by on side streets.

Little retail activity took place beneath the arrays of glittering lights strung above the street. But Red Bank RiverCenter executive director Laura Kirkpatrick said shops and more restaurants are expected to join in, following a surge of late permit applications to borough hall.

“Some are taking a wait-and-see approach,” she said.

Under a borough program aimed at jump-starting a post-pandemic recovery, Broad Street between West Front and Wallace streets will become a pedestrian dining and shopping plaza from 3 p.m to 10 p.m. Thursday through Saturday evenings until further notice. Contrary to earlier reports, Broad Street will remain closed to vehicular traffic throughout the day on Fridays and Saturdays.

Monmouth Street between Broad and Maple Avenue would be closed all day Sunday for the same purpose.

The opening-night customers included Tatiana Vassas of Red Bank and her siblings, Gavin and Scarlett Collins, who were among the few patrons wearing face coverings while not dining.

“We actually didn’t know this was happening” when they came in to get takeout, said Vassas. But they were excited by the atmosphere and decided to have a sit-down meal at Bistro.

She gave the restaurant good marks for food and a QR-code system for touchless menus, but was less pleased that the mask worn by her server didn’t always cover his nose, she said.