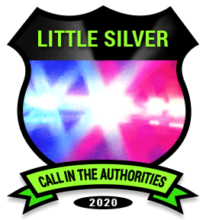 The crime and arrest reports below were provided by the Little Silver Police Department for July, 2020. This information is unedited. For additional information, please scroll to the bottom of this post.

July 1– A victim reported Harassment after a subject made threats and called the victim derogatory names when the victim exited a business on Sycamore Ave. P.O. Jack Massaro investigated.

July 6– A resident from Salem Ln. reported Fraud after receiving cell phones through a delivery that the resident didn’t order. An unknown subject came to the house attempting to pick up the phones. Subject fled scene prior to police arrival. P.O. Keith Ludwig and Det. Sgt. Greg Oliva investigated.

July 11– A resident from North Sunnycrest Dr. reported Fraud after discovering that an unknown subject(s) posed as an employee from Microsoft gained access to their computer and removed a large amount of money from their bank account. Lt. Paul Halpin and Det. Sgt. Greg Oliva investigated.

July 12– A resident from Winfield Dr. reported Terroristic Threats after being threatened by a motorist who stopped and urinated on the resident’s property. Motorist fled the area prior to police arrival. Lt. Paul Halpin and Det. Sgt. Greg Oliva investigated.

July 12– An employee from a business on Branch Ave. reported Criminal Mischief after discovering that an unknown subject(s) caused damage to property at the business. Det. Sgt. Greg Oliva investigated.

July 17– Breiteahn Hardiman, 19, of Rahway, NJ, was arrested following a motor vehicle stop on Prospect Ave. for an active Contempt of Court warrant out of the City of Garfield Municipal Court in the amount of $1,000.00. P.O. Jack Massaro made the arrest.

July 17– Devyn Blount, 18, of Long Branch, NJ, was arrested following a motor vehicle stop on Hance Rd. for Possession of Marijuana Under 50 Grams. P.O. Scott Lorenson made the arrest.

July 24– A resident from North Rivers Edge Dr. reported Auto Theft after discovering that their unlocked vehicle had been stolen out of their driveway during the evening hours. P.O. Keith Ludwig and Det. Sgt. Greg Oliva investigated.