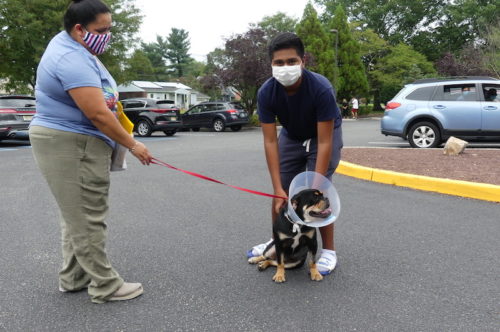 Cesar Pacheco of Red Bank and his mother, Vicky, were reunited with their dog, Bella Thursday morning following surgery on the animal that community members helped pay for.

As previously reported by redbankgreen, Bella, a 15-month-old bulldog, became ill earlier this week, and was diagnosed with a life-threatening blockage in her stomach and intestines.

Facing a $5,000 bill for surgery that his parents could not afford, Cesar, a recent graduate of Red Bank Middle School, took an aunt’s advice and launched a GoFundMe campaign to drum up financial support.

“I thought we’d only get, like, $200,” the 14-year-old rising freshman at Red Bank Regional High said Thursday.

But within 24 hours, the drive brought in contributions of $5,760, just as Bella was about to be released following surgery at Red Bank Veterinary Hospital in Tinton Falls. His parents had to borrow money in the interim, said Cesar.

Among the 93 pledges was one for $1,000 from 11th-district state Senator Vin Gopal, whose district includes Red Bank.

“They said she’s doing fine,” said Cesar’s mother, Vicky, as she brought Bella out to be reunited with Cesar in  the hospital parking lot.

Vicky, a lunchroom employee at the Red Bank Primary School, said she was overwhelmed by the response to the fundraiser.

“I feel so happy,” she said. “She’s here, and I love my town for all the support the people gave to us.”