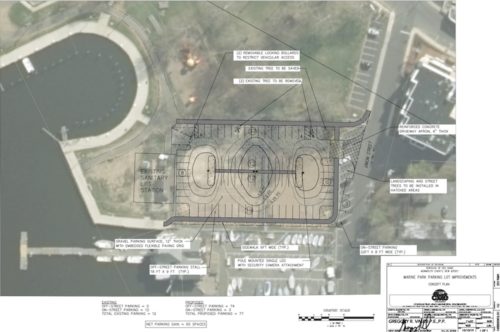 The plan calls for a new parking lot on the former site of the Marine Park tennis courts. (Image by CME Associates. Click to enlarge.)

A new parking lot in Red Bank’s Marine Park is among the topics slated for discussion by the council Wednesday night.

So is an issue put on hold five months ago: increasing the hours of paid parking downtown. 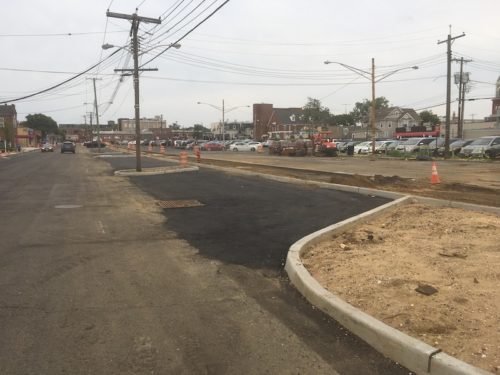 The White Street reconfiguration now under construction will feature angled parking spots interrupted by landscaping bumpouts. Below, the Marine Park tennis courts as seen in 2016. (Photos by John T. Ward. Click to enlarge.) • At its monthly workshop meeting, the council will be asked to advance the parking lot portion of a larger Marine Park transformation project to the design and engineering phase, Business Administrator Ziad Shehady told redbankgreen Friday.

The lot, which would be created on the site of red clay tennis courts destroyed by Hurricane Sandy in 2012, is one piece of an eventual makeover envisioned for the riverfront park.

That plan, created by developed by the Baltimore urban planning firm Kimley-Horn, and presented to the council in March, 2019, is not yet on the agenda, however.

Instead, the borough is working through a punchlist of major parking projects recommended both by an outside parking consultant and in a memo written by former borough parking manager Tom Calu, Shehady said.

The Kimley-Horn plan for Marine Park calls for relocating the parking lot to the tennis court site at the park’s western edge.

The existing lot would eventually be replaced by open green space, raised some two feet from its present elevation and rimmed by a “seat wall” to reduce impacts of tidal surges, landscape architect Scott Scarfone told the council in 2019.

That would effectively shrink the parking inventory in the park by 14 or 15 spaces from the present 86, Scarfone said.

Meantime, creating the lot “would allow the borough to generate revenue towards the Marine Park project while expanding the parking inventory in the process,” Shehady told redbankgreen.

The cost of the lot was covered by a $3.2 million bond approved by the council in December that also covered the cost of the White Street makeover and reconfiguration of the adjoining municipal lot, both of which are now in construction: new curbside meters throughout the downtown, recently installed; and new parking kiosks in parking lots.

Also covered by the bond, but not yet begun: a makeover of the East Side municipal lots that run parallel to Broad Street between Linden Place and Mechanic Street.

• Back in early March, the council was expected to begin discussion about extending meter collections and to stretch enforcement beyond the current 6 p.m. cutoff by four hours, Monday through Saturday.

But the matter was tabled at the request of downtown promotion agency Red Bank RiverCenter until completion of the White Street project, Shehady said.

No change in rates is proposed at present.

If an ordinance amonding the hours is introduced this month and adopted in September, it would become effective October 1, Shehady said. By then, the White Street projects will have nearly complete, Shehady said.

“Enforcement of all parking regulations downtown will resume,” said an announcement posted on the borough website Friday.

• Here’s the full agenda for Wednesday’s session. The council meets via Zoom at 6:30 p.m. Access information can be found here.