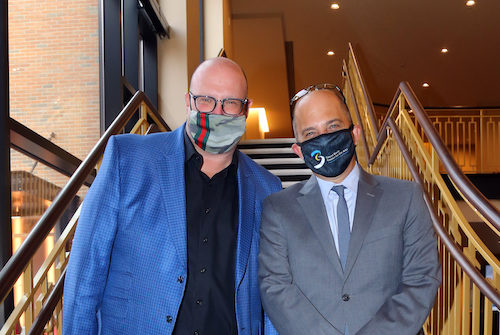 The Count Basie Center for the Arts, the not-for-profit performing arts center with a mission to “Inspire, Educate and Entertain,” announced today that Jeremy Grunin has accepted the role of Chairman of its Board of Trustees.

Mr. Grunin, of Toms River, joined the Basie board in 2015, served as the organization’s Vice Chairman of Development, and been instrumental in the success of the Basie during that time. He has previously served as Chairman at Fulfill of Monmouth and Ocean Counties, and also served the boards of Monmouth University, YMCA of Greater Monmouth, Council of New Jersey Grantmakers and Meridian Healthcare Foundation.

He is the Vice President of commercial investment company Grunin Holdings, and presides as President of his family’s Grunin Foundation, which advocates for business and nonprofits to work together to provide communities with an abundance of exemplary arts, culture, education, healthcare and economic opportunities.

“This could not be a better moment for Jeremy to enter as Chairman, as we are poised to open what will become one of the most important arts and education centers in New Jersey,” said Adam Philipson, President and CEO, Count Basie Center for the Arts. “I have had the privilege of working closely with Jeremy and his father, Jay, for the past four years and their family’s devotion to the arts and our communities is palpable. As the Basie finds itself in a time of recovery and resilience there could not be a better and more committed person at the helm of our ship to make sure we are on the right course for our future.”

Mr. Grunin also serves as Co-Chair of the New Jersey Arts and Culture Recovery Fund, which to date has raised more than $2.3 million to aid the arts and culture sector in the wake of the COVID-19 pandemic.

“I’m honored to head a Board of Trustees for an organization that has achieved so much over the last five years,” said Mr. Grunin. “The Basie’s trajectory has been upward, to say the least – a major capital campaign and expansion, a significant growth of the Basie’s work in arts education and community outreach, and, recently, the various pivots made by the nonprofit to keep its mission intact, despite the financial realities of the pandemic.”

“Those realities will be a focus for our board moving forward, so that the Basie may continue its work and remain operational while we plan and strategize for survival in a post-COVID world.”

In 2018, the Basie announced a generous gift from the Grunin Foundation to name its new Arts Education Building, part of the Basie’s storied capital expansion. The Grunin Arts and Education Building includes five new classrooms and rehearsal spaces, and houses the Basie’s new second performance venue, administrative offices and the Rock and Rohl Rooftop Lounge. Already hosting onsite classes as part of the Basie Center Academy of the Arts, a formal dedication of the building is planned for later this year.

“My father, Jay, and I are so honored to be able to support the Basie’s new arts and education building,” Mr. Grunin said. “Arts and education represent two incredibly important pillars in our foundation’s commitment to driving economic excellence at the Central Jersey Shore. The Basie Center, of course, is a perfect interest point for that work to thrive.” The Basie earlier this year completed a $28 million expansion more than doubled the size of the Count Basie Center for the Arts campus, including a new grand lobby, donor lounge and the William J. Basie Arts Plaza on its historic east side. The expansion also addressed long outdated accessibility challenges by creating a completely barrier-free environment and adding elevators to the 94-year old building.

The Basie Center also announced the appointment of Ms. Claudia Dulac and Ms. Maria Maher to its Board of Trustees. Ms. Maher, who co-chairs the Basie’s Education Committee, and Ms. Dulac, SVP, New Jersey Market Executive at Bank of America, were approved unanimously to continue their advocacy for the Basie Center and its community.

The Basie Board of Trustees is composed of 39 members who are each elected to three-year terms.

Posted on September 17, 2020 at 7:20 am, filed under All Good, Art, Entertainment, Philanthropy, RED BANK and tagged count basie center for the arts, count basie foundation, jeremy grunin, nj, red bank, trustees. Bookmark the permalink. Follow any comments here with the RSS feed for this post. Trackbacks are closed, but you can post a comment. Email this story.
PREVIOUS: RED BANK: ‘ALLAIRE HOUSE’ ON HPC AGENDA NEXT: SHREWSBURY: CRIMES AND ARRESTS
redbankgreen.com