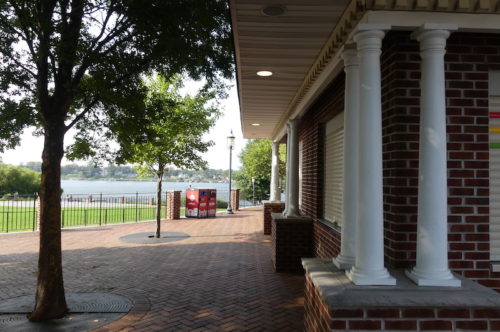 The former concession stand at Riverside Gardens Park has been vacant for the past year. (Photo by John T. Ward. Click to enlarge.)

Rarely used for two decades before short runs as an ice cream stand and a gourmet takeout restaurant, the vacant structure will be reopened as an office and public interface for the borough’s parking enforcement unit, Business Administrator Ziad Shehady tells redbankgreen.

There, visitors will be able to obtain “information and assistance with any parking matters (e.g. meter/kiosk issues/questions, permits),” Shehady said via email Monday. Maps and other information will be available, he said.

Motorists whose vehicles have been ticketed won’t be able to pay the fines at the stand, though. Those are judicial matters that can only be handled by the court, Shehady said.

The space will be staffed by a half-dozen employees, he said. Three of them – the parking services manager, an administrative assistant and a parking technician –now work in a trailer at the Chestnut Street public works yard.

In a January memo, former parking consultant Tom Calu described the office as “cramped, depressing and functionally inadequate, hampering staff’s ability to organize and perform the required work, and denying the community convenient access to assistance.”

Calu suggested the borough open a first-floor storefront close to the center of town, providing both office space and a counter to serve the public.

Parking enforcement personnel, who are being put under the command of the police department, also will work out of the park office when not on the street, Shehady he said.

The proposed relocation of the office to the park offers a “creative, minimal-cost” solution, Shehady said. Another plus: “we own it,” he said.

Shehady said the facility will provide a central location for residents and visitors who, before COVID-19 prompted limits on access to borough hall, would often mistakenly stop at the courts office, the police station or the clerk’s office in search of parking permits and more, he said.

Oh, and the public restrooms will be open more reliably, he said.

The stand, essentially an “empty shell,” has been made “suitable for office use for less than $2,500, excluding updated technical install needs (internet wiring),” Shehady said.

The facility will be open Monday through Saturday, from 9 a.m. to 5 p.m., and one night a week until 9 p.m. An opening date will be announced on the borough website, he said.

The stand was built along with the park in the mid-90s, but was infrequently used until 2016, when ice cream vendor Gracie and the Dudes obtained a two-year lease in a bidding competition.

But their bid for a three-year renewal was rejected as insufficient, and officials decided in February to keep the space for borough purposes.