LITTLE SILVER: ODD LOT TO GET NEW USE 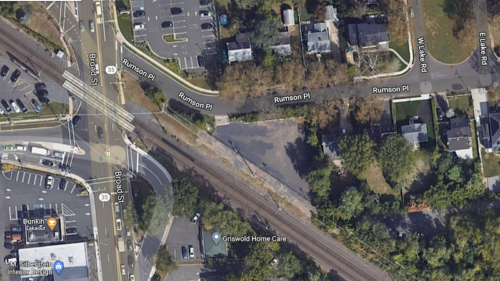 Use of the triangular lot on Rumson Place near Broad Street raised concerns for neighbors. (Photo from Google Maps. Click to enlarge.)

The Little Silver planning board on Thursday gave a green light for a local landscaper to use an odd lot with tricky access to store his vehicles overnight.

At issue during the board’s monthly session, conducted online, was a triangular lot at the western end of Rumson Place, just feet from the intersection with Broad Street/Route 35.

The fenced and landscaped lot adjoining the North Jersey Coast Line tracks long served as a place where Rassas Pontiac, long based at the corner of Broad and Rumson Place, stored cars. But Aaron Rassas sold the dealership property to Walgreens, which built a store on it in 2015, and the storage lot has been vacant since.

Marty Ryser, owner of Ryser’s Landscape Supply on White Road, had originally proposed erecting a 2,400-square-foot storage building on the Rassas site, but withdrew that plan.

Instead, the gated site would be used strictly to store three vehicles used by a separate lawn maintenance operation, Ryser told the board.

Nine employees, who carpool to work, would arrive in the morning, take the trucks out and return at the end of the workday, Ryser said.

No signage is planned, and the site would not be used to store any bulk materials such as mulch or salt, Ryser said.

During the session, conducted via Zoom, neighbors voiced concern about trucks driving past homes. Traffic flow on that portion of Rumson Place is one-way east, from Broad Street to West Lake Drive, where it becomes two-way. That means Rysers’ vehicles must head out through the neighborhood to the east in the morning.

But they’ll only be able to access the yard from Broad Street in the evening, noted board member Dane Mihlon. So three trucks would pass through the neighborhood just once a day, he said.

Ryser said the trucks are regularly there already, because the business provides lawn services to about two dozen homes in the neighborhood.

The board focused some attention on the question of how the trucks, especially those pulling trailers loaded with lawnmowers and other gear, will get into the site. According to Ryser, vehicles must be backed into the lot, because there’s not enough room for them to turn around once inside.

Board member Doug Christensen asked whether the street could be made two-way between Broad and West Lake. But board attorney Michael Leckstein said there was “no way” the New Jersey Department of Transportation, which controls Route 35, would permit traffic to exit onto it.

“It’s just not going to happen,” he said.

After expressing doubt that his trailer-pulling vehicles would be able to back in coming from Route 35, Ryser assured the board that his workers would have no difficulty with the maneuver. But several residents voiced concern about its safety as other vehicles also head east from Broad Street.

Posted on October 2, 2020 at 8:30 am, filed under Business, Featured, Home & Garden, LITTLE SILVER, Parking, Real Estate and tagged aaron rassas, little silver, marty ryser, nj, real estate, rumson place, ryser's lawn care, Traffic. Bookmark the permalink. Follow any comments here with the RSS feed for this post. Trackbacks are closed, but you can post a comment. Email this story.
PREVIOUS: ON THE GREEN: BRIGHT WEEKEND AHEAD NEXT: LITTLE SILVER: ‘AT LEAST’ 58 ISOLATED BY RBR