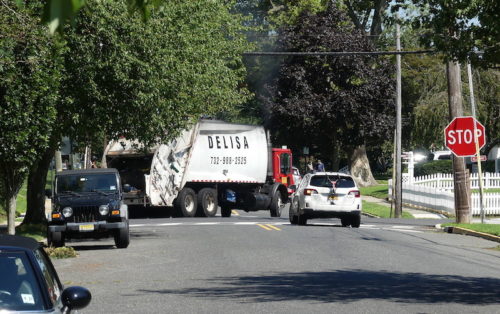 DeLisa Demolition won the bidding to haul the borough’s trash and recycling for another five years. (Photo by John T. Ward. Click to enlarge.)

Months later than expected, Red Bank officials agreed this week to enter a new five-year contract for private trash hauling, one that will increase the frequency of recycling pickups.

They also agreed to hire an outside attorney to look into disputed emails about the bid specifications. Internal communications by, and about, Councilman Ed Zipprich are to be the subject of an attorney’s report. (Photo by John T. Ward. Click to enlarge.)

At its final session of 2020 Wednesday night, the council approved a contract with DeLisa Demolition that would see the Tinton Falls firm paid $4.56 million over three years.

Marpal Disposal, the only other bidder, offered to do the work for a total $5.16 million over three years.

Five years ago, when the borough privatized solid-waste hauling, DeLisa won the work with a $1.49 million bid for the first three years. As per the contract, the town exercised an option to extend the pact for two years, into 2020.

There is a premise to your comparison that I think needs to be addressed – the 2020 resolution and the amount you referenced [$4.56 million] is the 5 year total of the bids, however, the contract awarded is just for the first 3 years at a cost of $2,538,000 with the option to extend for year 4 and 5.  In this case, the $4.563 million total amount in the Resolution includes the cost of year 4 and 5 but they have not been awarded.  That determination will come later.  The reason this is important is because the year 4 and 5 bid amounts are what drive that total up so much. So to compare apples to apples, the first year is $821,000, or, a three year average is $846,000/year. Therefore, it’s not triple, or even double per year compared to the 2015 numbers.
The first contract was put out to bid in 2015.  I think the circumstances have changed a lot in 5 years which accounts for the increase in price – the normal increase in expenses over time being the largest driver of the change. It’s not unusual to see such a change between 2 garbage bid cycles – that’s reflected in the close bids received by the other vendor.  Additionally, the recycling commodity market in 2015 was different than it is today – vendors could bid less because they expected to make money on recycling.  They are not making money on recycling anymore so their costs aren’t offset by the market and they have to make that up in the contract price for collection now.
It was also the first contract the Borough had with Delisa, and the Borough did not account for everything necessary at that time.  For example, public litter baskets around town were only to be picked up twice per week under the 2015 specifications.  After awarding the contract, the Borough asked Delisa for two more weekly collections.  The 2015 bid specifications only asked the vendor for twice per week pickup at the schools. After awarding the contract, the Borough also asked Delisa for two more weekly collections. These changes resulted in a separate order for an additional $12,000 per year cost that is not reflected in the 2015 contract numbers.
Some of the factors that would have a lesser impact are the other operational changes:

He said the administration plans to meet with DeLisa to work out details, and afterward will “publish an announcement outlining the changes that will affect the public.

In a related action, the council approved the appointment of outside attorney Barry Cooke to look into the August release to redbankgreen of internal emails concerning the trash bids.

As previously reported, the emails centered on assertions by Shehady that Councilman Ed Zipprich appear to be out to “sabotage” the bidding for a new trash hauling contract.

Councilmen Erik Yngstrom and Hazim Yassin have called for an investigation into whether Zipprich had improper contact with DeLisa while bids were being solicited.

Zipprich, however, maintains his communications with DeLisa was aboveboard, and that the anonymous release of the emails should instead be investigated.

Under the resolution appointing him, Cooke is to produce “a report opining as to whether the Borough should commission an independent investigation of the facts and circumstances regarding potential interference with the Borough’s sanitation contract bid  during the summer of 2020 and/or the subsequent release of confidential information related thereto in August 2020.”

The written report is to include Cooke’s “findings, conclusions and suggested corrective action(s), if any.” He’s to be paid a fee not to exceed $7,500.