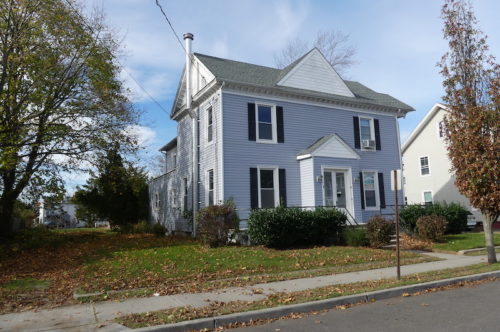 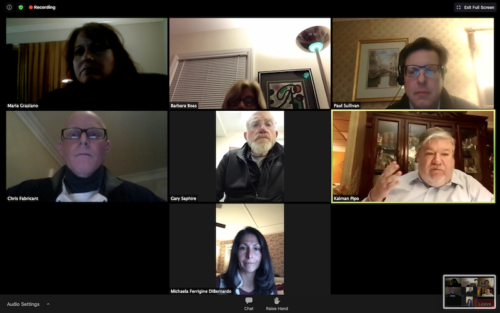 The HPC as seen via Zoom at the November meeting. (Click to enlarge.)

Holmdel resident Paul Hormann, who owns the three-family at 46-48 Washington Street with his wife, Jane, had the 10-inch stainless steel chimney installed on the south side of the structure in November, 2018.

The internal brick-and-mortar chimney it replaced had become “dangerously deteriorated,” with falling bricks blocking the flue and causing leakage of carbon monoxide gases, the couple said in a letter to the HPC. The volunteer fire department had to respond “numerous times due to CO2 alarms sounding,” they wrote.

That chimney could not be fitted with a liner sufficient to handle the combined BTUs from three hot water heaters and three boilers, Hormann told the board at its November 18 session.

But two months after contractor AJ Perri installed the new chimney, borough building officials issued a notice of violation, alleging the work had been done without a permit.

In addition, the Hormanns were directed to seek approval by the HPC, which has regulatory oversight of the historic district centered on Washington Street.

Andrew Gamatko, of AJ Perri, told building officials by email that the brick-and-mortar chimney was replaced “to ensure the safety of the tenants.” A permit application was not made beforehand “simply because we were going to submit it with” an application for two water heaters, which had not yet been installed, he wrote.

“I agree it doesn’t look very nice the way it is,” Hormann told the board in November. “We don’t want to break the style of the neighborhood, but we had no choice but to put this chimney in.”

Hormann offered to coat the metal chimney in a metal-adhering paint to match the siding of the house. Building a box around the chimney “would look worse,” he said, noting that other homes in the district have pipe chimneys.

But HPC Chairwoman Michaela Ferrigine said the work had been done “somewhat surreptitiously.”

“Obviously, you had a hazard issue in terms of venting, and that’s something we definitely have to take into consideration,” she said. “But it would have been preferable to have a discussion to see if there were other options.”

Hormann, who has owned the house since 1993, said he was unaware of the district’s restrictions until last August.

Board members praised the Hormanns for maintaining the decorative wood dentil work that trims the roof. “It’s obvious to us that you are cognizant of the historic character of the house,” said Kal Pippo.

But “one of the issues that presents itself repeatedly in the district,” said Ferrigine, is that “there are quite a few absentee landlords,” some of whom make changes without HPC approval.

Resident owners, said Ferrigine, “repeatedly come to us saying, ‘why is this allowed? An absentee owner is basically putting a quick fix, a cheap fix, on a house, and here we are doing our utmost to beautify our homes and the district.’ People say, ‘why was this allowed?’ Well, it wasn’t allowed.”

In this case, she said, the HPC was alerted to the chimney by neighbors, “because it was shiny, silver, stainless steel and completely out of place.”

Had a permit application been filed, “we immediately would have said there needs to be a different solution,” Ferrigine said.

Neighbor Andy North of Washington Street disputed Hormann’s assertion that painting the installed chimney would make it look better than others in the neighborhood.

Board member Gary Saphire said a mere paint job would leave the structure “really out of character for the historic district. There has to be some other solution.”

The Hormanns went back to the drawing board. At the HPC meeting Tuesday, conducted via Zoom, AJ Perri’s Gamatko outlined a plan to remove the two-year-old chimney and replace it with one that would run through a one-story kitchen “bump-out” on the south side of the house.

It would also consist of 10-inch steel pipe and would be painted, but would be not be visible from the street, he said.

“I don’t believe you’ll even be able to see the flue cap,” Gamatko said.

“The safety of the inhabitants of the house should be our primary goal,” she said. “So unless we want to put this off and go on forever with this and not come up with a solution for the homeowners and the residents, we need to make a decision on this tonight, I think.”

Pipo said the rerouting “does a fairly decent job of hiding it from the street view.”

With Ferrigine absent, the commission approved the plan by a 4-1 vote. Sullivan voted no, saying he didn’t have a clear enough idea of the proposal.

A building permit for the work will be required, board members noted.