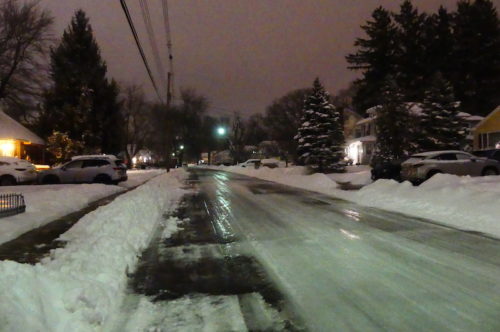 The fourth snowfall of February left eight or more inches of fluffy crystal on the Greater Red Bank Green Thursday, according to the National Weather Service.

The “snow event” still wasn’t quite over early Friday, as a cold mist added to a layer of ice on roadways, as seen on Madison Avenue in Red Bank, above.

Freezing drizzle was expected to continue into mid-morning, with periods of light snow, sleet, freezing rain and rain persisting into the early afternoon, according to the NWS forecast. All that could mean another inch or so to shovel and salt.