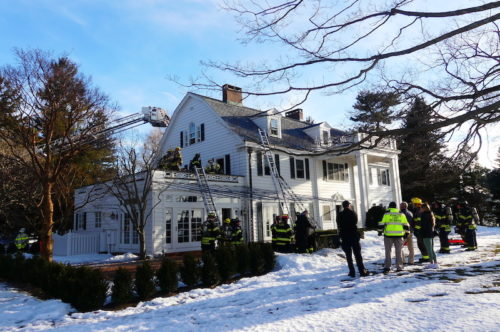 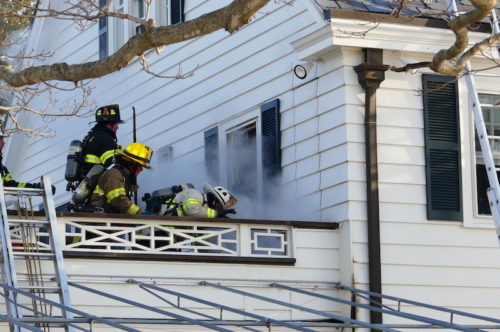 Volunteer firefighters on the scene. (Photos by John T. Ward. Click to enlarge.)

The incident was described as a basement fire at 45 Haddon Park when Fair Haven volunteers put in a call for Red Bank to dispatch a ladder truck at 3:25 p.m.

Police Chief Joe McGovern told redbankgreen no one was in the house at the time. A contractor working outside smelled smoke and called it in at the same time an alarm was triggered inside, he said.

Though flames were not visible from outside, firefighters could be seen attacking the source of white and gray smoke on the roof of a one-story sunroom overlooking the Navesink River. The fire appeared to have been doused by 4:30 p.m.

McGovern said the fire, which appeared to be electrical in origin, started in the basement and traveled through a wall to the kitchen and second floor. The house sustained significant smoke and water damage, he said.

The white clapboard Colonial mansion, accessible via a narrow lane, is owned by a limited liability company of which Thomas G. Labrecque is the general partner, according to a  New Jersey business filing.

Posted on February 17, 2021 at 6:10 pm, filed under FAIR HAVEN, Featured, Fire and tagged 45 haddon park, Fair Haven, Fire, nj. Bookmark the permalink. Follow any comments here with the RSS feed for this post. Trackbacks are closed, but you can post a comment. Email this story.
PREVIOUS: SHREWSBURY: CRIMES AND ARRESTS NEXT: RED BANK: SLIPPERY CONDITIONS PERSIST