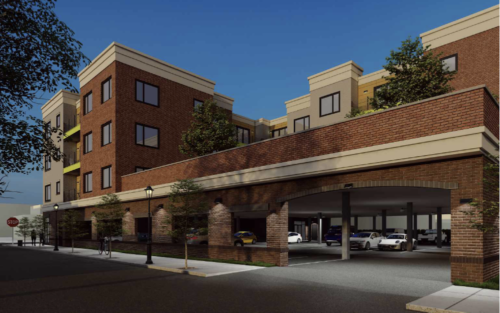 A view of the proposed project as seen from the Pearl Street side. (Image by S.O.M.E. Architects. Click to enlarge.)

A proposal for 32 apartments on Monmouth Street in Red Bank met little resistance when it went to the zoning board for review Thursday night.

The only sticking point, so far: whether to incorporate a three-bedroom affordable unit into the structure or provide it offsite. 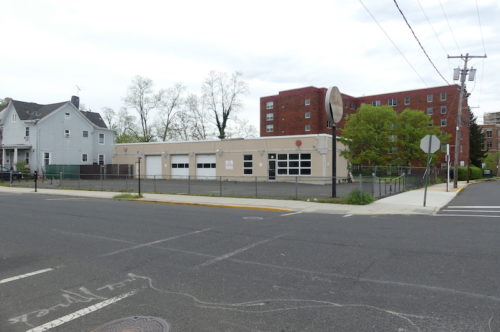 A current view of the property. Below, a star marks the second-story unit where an architect testified the three-bedroom unit would have to be located. (Image by S.O.M.E. Architects. Click to enlarge.) 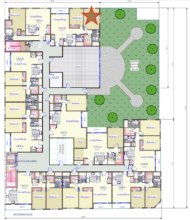 The apartment would be one of five units provided for low- and moderate-income tenants at 120 Monmouth Street, under a plan by Mountainside-based Park Valley Development.

But it could not be fit onsite without reducing the size of an adjacent second-floor amenity room or an outdoor leisure space, architect Michael Simpson told the board.

Developer’s attorney and former mayor Ed McKenna said the unit is required under New Jersey affordable housing precedent, and would be provided either way according to the board’s preference. The few board members who spoke on the issue had mixed views.

Park Valley, whose principals were identified as Gerard Burdi, Nicholas Burdie and John Mango, bought the property, at the northwest corner of Pearl and Monmouth streets, for $1.43 million in 2018, according to Monmouth County records. Now vacant, it was historically a gas station and last used as a Crossfit gym.

Their proposal calls for thre stories of residences, as well as the green space, to be built above an at-grade parking lot available only to tenants and the operators of about 1,300 square feet of commercial space.

The apartments would range from 800 to 1,1000 square feet, and each would have a private balcony, said Simpson, of S.O.M.E. Architects.

Also during  the hearing, traffic consultant John McCormack testified, without contradiction, that the project would not noticeably impact traffic at the corner during peak travel times.

He cited a traffic study he said was conducted in February, 2020, before the onset of the COVID-19 pandemic, and while the Count Basie Center for the Arts was hosting a performance.

McCormick also said the plan for 47 parking spaces was more than needed by tenants, using various parking-industry metrics. Still, the plan is short of the 62 spaces required by borough ordinance, noted board engineer Ed Herrman.

The garage would be accessed via a single driveway, on Pearl Street, with tenants able to activate a gate remotely, McKenna said. The public would not have access.

The plan didn’t show any electric vehicle charging stations, though developments with more than 20 parking spaces are required under ordinance to provide them, Herrman said.

“So put it in,” said board attorney Marc Leckstein. He urged the developer to install more than one in the garage. “You’re probably going to be better off in the long run, because more and more people” will be driving EVs, he said.

During the hearing, McKenna said he was interrupted by a text from his daughter-in-law alerting him that he’d become a grandfather for the first time. The baby was a boy, he said.

The hearing was scheduled to resume May 20.

In other business the board:

• Approved a plan for the rehabilitation of a long-vacant home at 38 East Sunset Avenue, on the northeast corner of Bridge Avenue.

• Approved a plan for a two story addition to the home of Redevelopment Agency member Megan Massey, at the southeast corner of West Sunset and Leighton Avenue.

• Approved, pending review by the Historic Preservation Commission, a plan for deck in the rear of 31 Washington Street.