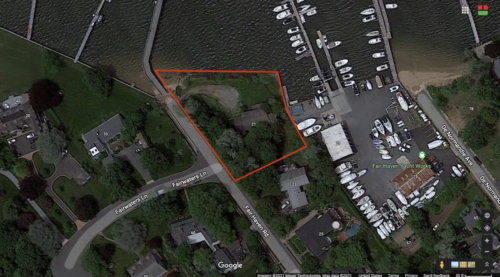 The property, comprising nearly an acre on the Navesink River, adjoins the municipal dock, (Photo by John T. Ward. Click to enlarge.)

Fair Haven hopes to add to its inventory of small waterfront parks. The property as seen from the borough dock in January, 2014. (Photo by John T. Ward. Click to enlarge.)

At its June 14 session, the borough council has scheduled a public hearing on a grant application to help fund the acquisition of a nearly one-acre parcel at the northern end of Fair Haven Road.

If acquired, the site would serve as public open space and recreation, according to the notice.

The desired funding is a grant from the New Jersey under the 60-year-old Green Acres program, and the hearing is required in advance of  the submission.

Owned by Joseph Spagnuolo, the property abuts the municipal dock and is assessed at $1.59 million. The house on the site was badly damaged by Hurricane Sandy in October, 2012.

Borough Administrator Theresa Casagrande told redbankgreen via email Tuesday that the council “is only in the initial stages of exploring this potential land acquisition. We have not obtained an updated appraisal, or began any formal negotiations.”

“I don’t anticipate that the Governing Body would move forward with the acquisition unless they could secure considerable grant funding,” she added.

An acquisition would require demolition of the house, under Green Acres rules.

The borough already owns passive riverfront parks at the northern ends of Grange Avenue, Hance Road and Battin Road, and has plans to improve waterfront access at all three in coming months.

Also in the borough’s open-space inventory is Williams, Albert and Robards Park at the northern end of DeNormandie Avenue, once the home of free African Americans who lived there before the Civil War.

It took the borough a decade to acquire and convert the site to a place for “contemplation,” as Mayor Ben Lucarelli put it at an October, 2019 dedication ceremony.