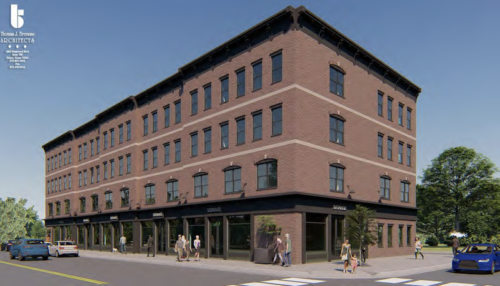 Twenty apartments would be built above stores at 234-240 Shrewsbury Avenue under a revised plan by developer Roger Mumford. (Rendering by Thomas J. Brennan Architects. Click to enlarge.) 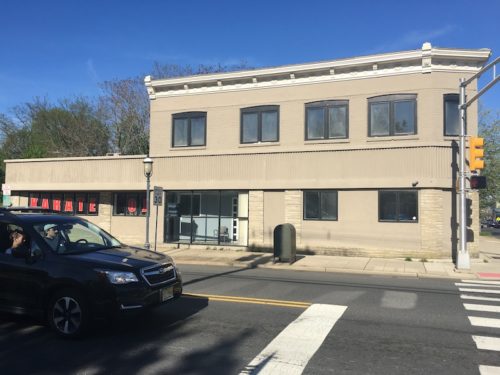 A new structure with ground-floor stores and 10 apartments would be built on the above site at Shrewsbury Avenue and Drs. James Parker Boulevard. (Photo by John T. Ward. Click to enlarge.)

• After a postponement over a document snafu last month, developer Roger Mumford returns to the board with scaled-back plans for the southwest corner of Shrewsbury Avenue and River Street.

The new plan for the project, dubbed the Parker at Shrewsbury, calls for 20 apartments, down from the original 23; a 17-percent reduction in the area for ground-level retail; and an increase of two parking spaces, to 34.

In the process, Mumford has added a pedestrian plaza at the corner.

• The board is also scheduled to resume its hearing on plans for 273 Shrewsbury Avenue, on the northeast corner at Drs. James Parker Boulevard.

The existing two-story building there would be demolished and replaced with a three-story structure containing 10 apartments, several stores and concealed, onsite parking.

Developer American Real Estate Opportunity Fund LLC had originally proposed 16 units, but scaled back the project following complaints by board members and neighbors that it was too big.

The zoning board meets at 6:30 p.m. Here’s the full agenda, with links to additional documents, and here’s how to listen in and participate.