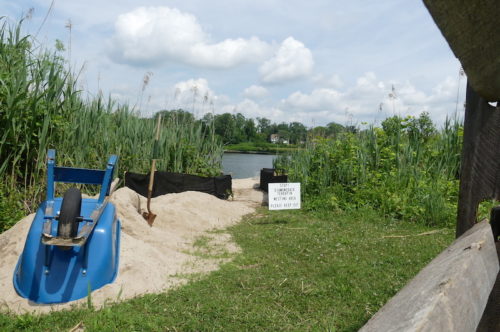 Creating the turtle habitat at Bellhaven involved trucking in a special blend of sand. (Photo by John T. Ward. Click to enlarge.) 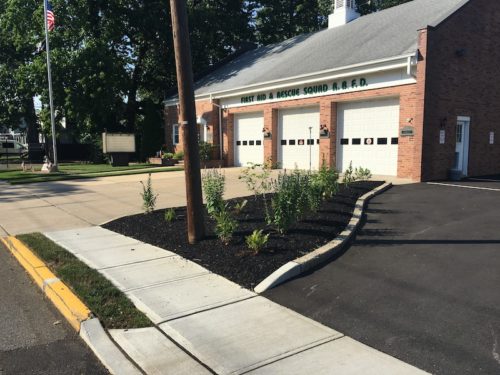 The new rain garden at the First Aid building on Spring Street. (Photo by John T. Ward. Click to enlarge.)

• In the Bellhaven Natural Area alongside the Swimming River, at the foot of Locust Avenue, the commission recently oversaw the creation of a turtle habitat.

It was needed, she said, because baby turtles were attempting to cross the new Red Bank Primary School emergency access road going to and from the river, but “some could not make it because the curbs on the access road were too high for them to climb over,” she said via email.

Some died there, and others were taken as food by bald eagles, she said.

Beginning in the summer of 2020, a group of volunteers from the commission, Project Terrapin, Clean Ocean Action and the borough’s Animal Welfare Committee met at Bellhaven to assess the situation and determine a location for a “turtle garden” – an artificial nesting site on the riverbank.

Jersey Soil Blending was contracted to bring in a particular blend of sand required to attract the terrapins. That expense, paid by the borough, was the project’s only outlay for the project, said Facey-Blackwood.

The turtles seem to like the result, she said. While organizers did not expect any turtle activity for at least a year, “we noticed turtles popping up with interest while the soil was being laid down, and 12 hours later there were signs that turtles were present,” she said. A recent count found four nests.

The habitat is located behind a split-rail fence, and visitors are prohibited from accessing the site.

• The commission also completed the creation of a rain garden at the volunteer First Aid building on Spring Street, also home to the Independent and Liberty Hose fire companies.

The location was one of the municipal properties recommended for action i in the Impervious Cover Reduction Plan created for the borough by the Rutgers Cooperative Extension Water Resources Program in 2017.

The garden, located in a small triangular island of pavement, does not need to be irrigated and should survive by picking up water runoff, said Facey-Blackwood. Rainwater gardens also help reduce stormwater runoff, according to the Rutgers report.

The borough “is adding rain gardens wherever feasible” as it works on projects, she said. There’s one in front of the public library, on West Front Street, and another was created as part of the White Street parking lot makeover near White Street and Maple Avenue, she said.