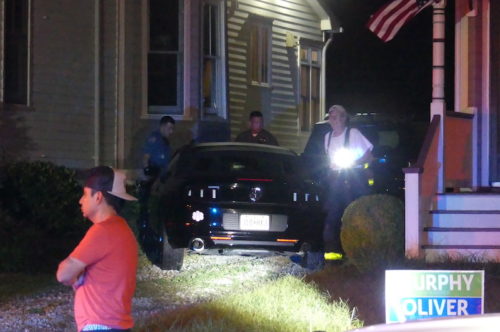 No injuries were reported after a car struck a home on Branch Avenue in Red Bank shortly before 4 a.m Thursday.

The vehicle appeared to have been traveling east on East Bergen Place when it continued across Branch and ran up the driveway of the home at 142 Branch before hitting the house. It  narrowly missed the home’s gas supply line and caused some damage to the foundation, said fire Chief Bobby Holiday.

The home of borough Councilwoman Kathy Horgan, next door, was not affected. Further details were not immediately available.

UPDATE: Following the publication of this post, redbankgreen received the additional information below from police Chief Darren McConnell:

The vehicle entered the driveway unintentionally and struck the homeowner’s vehicle and the house causing some structural damage to the foundation. The driver of the vehicle left the area on foot prior to police arrival but was subsequently located at his residence on Branch Avenue, approximately a block away from the crash. The driver, Orlando Canete-Olivares, 21 years old, of Red Bank was charged with various motor vehicle summonses including Reckless Driving and Leaving the Scene of an Accident. The crash was investigated by Ptl. Shane Dengel.

Posted on September 23, 2021 at 5:16 am, filed under Accidents, Featured, Fire, RED BANK and tagged accident, nj, Orlando Canete-Olivares, red bank. Bookmark the permalink. Follow any comments here with the RSS feed for this post. Trackbacks are closed, but you can post a comment. Email this story.
PREVIOUS: RED BANK: SEASONS ON THE WING NEXT: RED BANK: REPAIR WORK CONTINUES