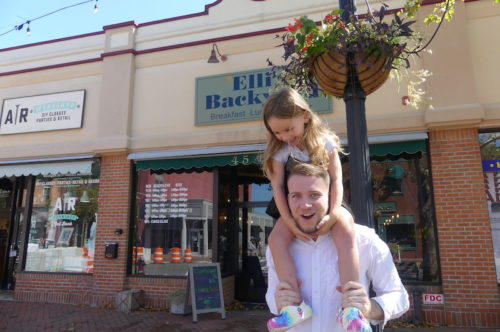 This edition of redbankgreen‘s Retail Churn delivers news about the opening of a new all-day restaurant in downtown Red Bank.

And on the business horizon: a new children’s shoe shop, and a cigar-and-CBD “tasting room.” 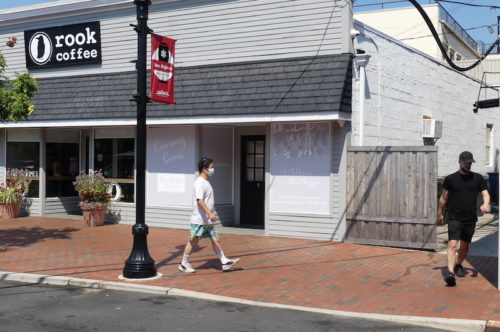 • Patrick Jeffry opened Elli’s Backyard a week ago at 45 Broad Street, the space vacated by  Via 45.

As Churn reported in June, the restaurant is the first business venture for the 23-year-old Keansburg resident, and is named for his four-year-old daughter.

Jeffrey calls it a “two-concept” restaurant. When it comes to eating out, he said, diners tend to be “either breakfast and lunch, or dinner, and I try to capitalize on both.”

The menu, which Jeffrey said he created with executive chef Louis Calderon, includes eggs Benedict, waffles and more for breakfast; burgers and club sandwiches at lunch; and eggplant rollatini and cavatelli broccoli at dinner, among many others listed on Open Table.

Jeffrey said he plans to be onsite at all times, sharing prep and cooking duties with Calderon.

“I worked aggressively hard for this opportunity,” scrubbing gym equipment and washing dishes at a pizzeria while in his teens, he said. It’s a work ethic he absorbed from his mother, Ryann Jeffrey, who powered through breast cancer “and wouldn’t take disability because she couldn’t afford the pay cut. The hustle, the grind, I get that from my mom all the way.”

Other restaurateurs report difficulty in hiring, or keeping staff: the Inbetween Café on English Plaza is temporarily closed, and Temple Gourmet on Broad is offering takeout-only, both because of employee shortages. But Jeffrey said he had no problem staffing up.

• Peek-a-Boo Shoes, a children’s footwear retailer, is getting ready to open at 8 White Street.

On a recent peek through the windows, Churn could see stock beginning to fill up the shop. But we were unable to connect with the proprietor for information in person or via email.

The space is where Vance and Margaret Valente plied their trade under the name Quicksilver Handcrafted Jewelry for 49 years, until retiring in June.

• Scarlet Reserve Room, a cigar shop and CBD (cannabidiol) “tasting room,” plans to open at 3 East Front Street, in September, according to its website.

The business has a store in South Amboy. An email seeking additional info went unanswered.

The shop space was vacated a year ago by clothing boutique Theo.