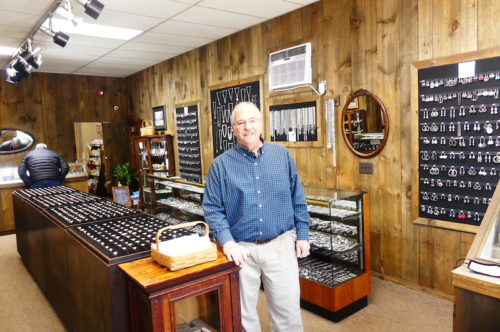 This edition of redbankgreen‘s Retail Churn might be titled “keeping churn to a minimum.”

Because while we’re reporting the closure of a downtown shop – due to retirement, not the economy – the change comes with a significant real estate deal aimed at keeping small shops alive. 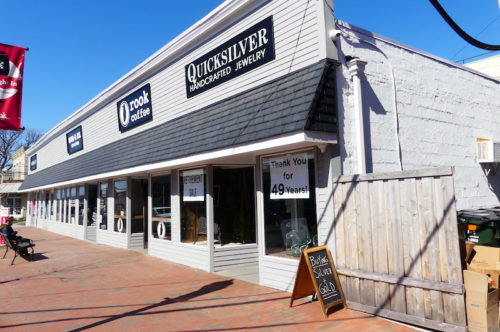 Quicksilver is at the east end of a four-shop building on the north side of White Street. Retailer Angie Courtney now owns the building, along with the one that is home to Sweetest Sin, her lingerie shop directly across the street. (Photo by John T. Ward. Click to enlarge.)

The first piece of that is the planned closing of Quicksilver Handcrafted Jewelry at 8 White Street.

Owners Vance and Margaret Valente announced Saturday that they’ll be retiring and closing their shop June 15. It’s been in the same location since it launched in 1972.

“The rent was $175 a month,” Vance told Churn with a laugh. “All the other tenants were paying $75, but I was the new kid on the block,” and felt lucky to find space in what was then a booming district, especially for jewelers.

Vance worked nights assembling cars at the General Motors plant in Linden to fund the store, where he and Margaret worked during the day. They married two years later.

Vance, who has served 18 years on the executive committee of Red Bank RiverCenter and its Visual Improvement Committee, said the coming change is strictly personal.

The retirement coincides with the recent sale of the building in which the Valentes store is located. Its other tenants are Rook Coffee, Hair & Co. and Cabana 19.

“We love our tenants. These people, they’re hand-picked, no problems,” Valente said. And he’s confident that the building’s new owner, Angie Courtney, is as committed to keeping them.

For the past two years, she’s owned the building across the street that’s home to her lingerie shop, Sweetest Sin, along with Chelsea Morning Salon, Semolina Restaurant and Red Bank Chocolate Shoppe.

The latest deal serves dual purposes: her desire to acquire and manage more downtown property, and to “help small businesses stay alive,” said Courtney, who is also deeply involved in RiverCenter and other downtown promotion efforts, such as the Red Bank 5K Classic.

All the businesses in the two buildings are well-established, “and I want to keep everybody here,” she said.

One key to the success of the stores in the facing buildings is that so many downtown visitors use the nearby White Street parking lot and get funneled past the shops when heading to and from Broad Street on foot, Courtney said.

Recent changes to create more parking at the lot, as well as short-term parking in front of the shops, has given an extra boost, she said.

“There’s constant turnover” in the spaces, she said.

“White Street is the best-kept secret in Red Bank,” said Margaret Valente. “It’s not like Broad Street, where some areas do well and others don’t.”

“That’s because these properties are owned by retailers,” said Vance. “They know how to write leases where we just don’t put people out of business.”

The price of the property sale has not yet been recorded with the Monmouth County Clerk.

• Broad Street Barbers has relocated to the storefront at 41 Broad Street, formerly home to Fashion Nails.

Hair stylists Riccardo Parrino and Jordan Ryan opened the barber business on the second floor of 15 Broad in 2018.

• Another onetime tenant of 15 Broad, Salon Concrete, will not be reopening at its home since 2013: the building it shared with fitness studio Pure Barre at 123-127 Broad.

Owned by Christine Zilinski, Salon Concrete had planned to operate shops in both Red Bank and in the Bellworks facility in Holmdel, according to its posts on Facebook. But as COVID-19 restrictions eased, the Holmdel site fired up its hair dryers and the Red Bank salon, which hosted occasional art shows, remained dark.

“As of now, we are not planning to reopen our Red Bank location,” a spokeswoman told Churn. “We do have hopes to one day reopen another Red Bank location and we will make sure to let our clients know when we begin that process.”