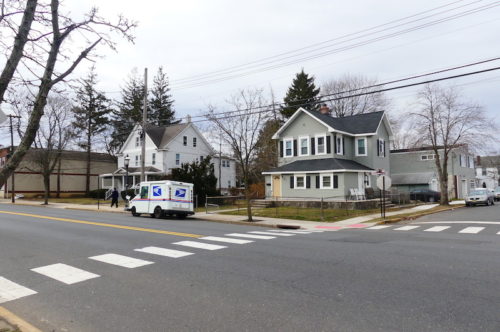 Two houses on Shrewsbury Avenue at River Street would be demolished to make way for the project, dubbed The Parker at Red Bank. (Photo by John T. Ward. Click to enlarge.)

A proposal for new stores topped by three floors of apartments is slated for review by the Red Bank zoning board this week.

A rendering of the Shrewsbury Avenue side of the project. Below, Roger Mumford at the opening of the T. Thomas Fortune Cultural Center in 2019. (Rendering by Thomas J. Brennan Architects; photo by John T. Ward. Click to enlarge.)

Houses at 234 and 240 Shrewsbury Avenue would be demolished and replaced by a single four-story building, under plans filed by Mumford’s Yellow Brook Property Co.

The new structure, dubbed the Parker at Red Bank, would extend 154 feet south from River Street, with 23 apartments and on-site parking for 27 vehicles in the rear, accessed via River Street.

By removing two driveways on Shrewsbury, the project would create several new parking spots out front, according to a traffic and parking analysis Mumford commissioned.

The apartments would be a mix of one- and two-bedroom units. Two of them would be classified as “affordable,” with the developer making a contribution toward a third, in order to comply with a 10-percent requirement, according to the filings.

The plans show 6,300 square feet of retail space on the ground floor.

Mumford built the Fortune Square apartments on Drs. James Parker Boulevard, the same site where he restored the National Historic Register-listed T. Thomas Fortune house. He donated the house to the T. Thomas Fortune Foundation for use as a cultural center.

Also on the board agenda is a proposal for a second floor on a single-story house on Sunset Avenue. Here’s the full agenda, with links to all relevant documents.

The zoning board meets at 6:30 p.m. Thursday via Zoom. Access and participation information can be found here.