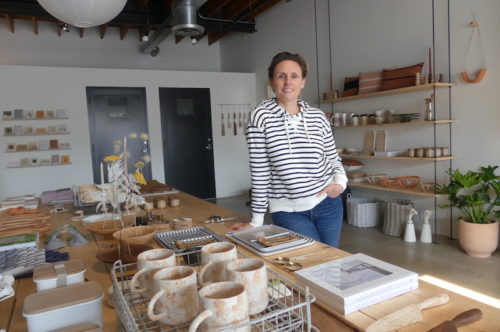 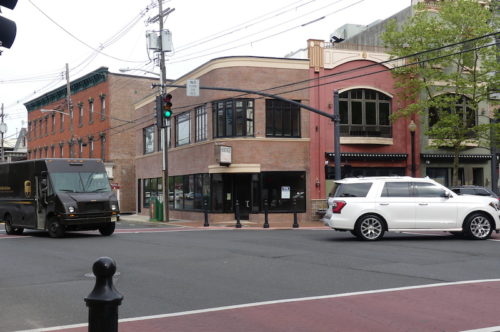 The owner of the newly renovated 1 Broad Street is looking for a tenant after a taco restaurant backed out of a deal. Below, the vacant Earth Pizza space is slated to be occupied by a bakery and café called Great Harvest Bread Company. (Photo by John T. Ward. Click to enlarge.)

The shop has been ready since April 4, but because her website didn’t have an online ordering piece, Montaperto hasn’t taken advantage of the curbside commerce option that’s been available to retailers for the past month under Governor Phil Murphy’s staged restart of the economy.

Montaperto, a River Plaza resident who previously worked in the tradeshow industry, told Churn she has long yearned to open the type of products she had to travel to Brooklyn or Asbury Park to find.

“I feel Red Bank needs a place like this,” she said.

While the start of her first-ever retail business has coincided with one of the worst economic storms in history, making for an “emotional” journey, Montaperto said she hasn’t wavered from her determination to, yes, forge ahead. And she is “as ready as can be to open” on June 15, the day “stage two” of Murphy’s reopening allows partial restarts of a range of businesses, she said.

• Not quite as soon, Michelle Ellis plans to open Great Harvest Bread Company in the former Earth Pizza space at 95 Broad Street.

Ellis describes Great Harvest as “a bakery café specializing in made-from-scratch bread and sweets,” with all bread, muffins, scones, cookies and other sweets made fresh every day, and the fresh made bread used to create made-to-order sandwiches.

Also on the menu: salads, soups and grain bowls.

Ellis tells Churn she’s shooting for an autumn opening because of pandemic-related delays in customizing the kitchen and an interior update.

• On the downside are business not expected to reopen.

Red Bank RiverCenter executive director Laura Kirkpatrick tells Churn that the downtown promotion agency is in the midst of a business survey to determine the impacts of the pandemic in terms of continuing operations, layoffs, hours and more.

Here are some of the known closings, not all of which are attributed to the pandemic…

The COVID-19 crisis “dramatically impacted” the business, Meder said in a Facebook post, in which he urged shoppers to make local spending a “top priority in maintaining and growing a vibrant local economy.”

• A few doors away, clothing boutique Haute Maven has called it quits after about two and a half years in business.

In a Facebook post, owner Maria Elizabeth Diaco said she had been “blessed to be given a short time to live out” one of her dreams.

“While I could choose to push on, I don’t believe it’s in the best interest of my staff, or my children,” she wrote. “I also don’t feel that owning a brick & mortar retail establishment with luxury items is the best idea when so many people are struggling just to feed their families, pay their mortgages.”

• Athans Bozinos, who recently completed an overhaul of the building he owns at 1 Broad Street to accommodate a restaurant to be called Taylor Taco told Churn that the deal is off.

“So yes the space is available, and I am looking for new tenants,” he tells Churn.

The ground-floor space has been vacant for nearly six years, since the departure of longtime owner Heritage Liquors.

If you value Retail Churn and other news about Red Bank economic activity, please become a paying member of redbankgreen. Click here for details about our new, free newsletter and membership information.