Hundreds marched through town to protest a racist rally in Charlottesville, Virginia in 2017. (Photo by John T. Ward. Click to enlarge) 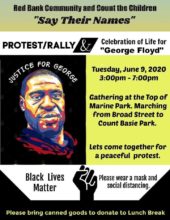 A “Justice for George” march and rally to protest the death of George Floyd while in police custody in Minneapolis is slated to be held in Red Bank Tuesday afternoon.

According to police Chief Darren McConnell, the event is being organized by Calvary Baptist Church of Red Bank and an organization called Count the Children.

The event is scheduled to begin at 3 p.m. at Marine Park, at Wharf Avenue and Union Street, where participants will gather for a march through town to Count Basie Fields, McConnell said.

The main rally will be held there, McConnell said. The event is scheduled to end at 7 p.m.

A poster for the event asks participants to wear masks, observe social distance. Canned food will be collected for donation to Lunch Break.

Posted on June 8, 2020 at 8:10 am, filed under Family matters, Featured, History, Houses of Worship, Human Rights, Misc. Events, RED BANK, World Affairs. Bookmark the permalink. Follow any comments here with the RSS feed for this post. Trackbacks are closed, but you can post a comment. Email this story.
PREVIOUS: RED BANK: REPORT OF SHOT FIRED NEXT: RED BANK: RETAIL DAMAGE, BUT HOPE, TOO